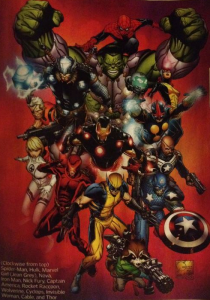 I mentioned back when we were hearing about “This is War,” now called Punisher Warzone, that there were going to be  big changes going on at Marvel. Not long ago today Entertainment Weekly gave us the picture to left of the Marvel Universe as of, “NOW!” Come find what else EW told us and what we might expect from this massive project.

In late 2011 DC moved to reboot it’s universe with the New 52, and it would appear that Marvel is now dancing to the beat and attempting a reboot of it’s own, entitled Marvel NOW!. We’re not sure about the in canon events that would lead up to “NOW” but we’re pretty sure a Flash is not responsible, though it may be a Phoenix.

Continuity aside, this event has been seen awhile coming. There were already reports that there would be editorial changes to some of the key books in the publication and now we know it’s to reflect the level of change in this event. I brought up the New 52, which brought out 52 new titles in rapid succession, because Marvel will now be relaunching one book per week for nearly half a year. That’s a lot of books, so expect a lot of collector value in getting those books and possible variants associated with.

While the function of Marvel NOW! seems aimed at giving books a more artistic and “cinematic feel,” as CBR reports, it’s a pretty good guess that it’s also designed as a way to reformat their continuity into a more reader friendly environment. Bare in mind, it’s pretty obvious that this is also a move to align the comic book continuity with their movie franchise. You’ll notice quickly that both Nova and Rocket Raccoon  are both featured right next to Wolverine and Captain America.

The news recently has been that Marvel is making a play toward taking their movie narratives away from Earth and focusing on galactic issues, i.e. Thanos. Guardians of the Galaxy, featuring Rocket Raccoon and sometimes Nova, is due to be the mystery 2014 movie. What better way to smooth the transition for a new cast of heroes than by giving them some good PR with immensely loved characters like Captain America and Wolverine?

So it’s clear that Marvel NOW! is position Marvel’s next couple of years of business across movies, comics and wherever else they decide to go. One thought might be, “with all this change where will the Ultimates universe go? Wasn’t edger and more artistic the game plan for that universe? Would it go the way of Earth 2 now that this stands a far more successful shot of accomplishing just that?” We may already be seeing the ground work for that played out in Spider-Men, that is actually crossing the two continuities together, perhaps looking to combine the two. My big question from all this, “how will the movie franchises begin to influence comics from here, and what precedence does that set for the industry as a whole?”