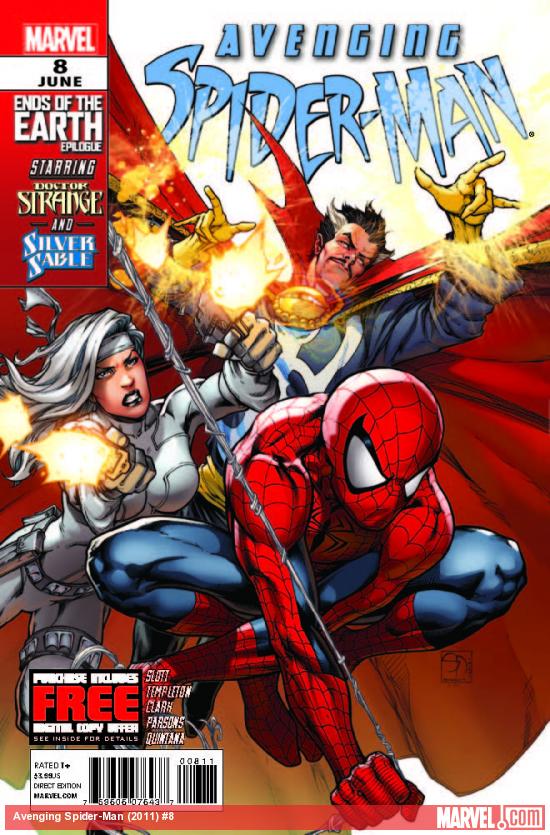 Spider-Man takes you back in time to show you an action packed team up between Silver Sable, Doctor Strange and himself in an epilogue to the “Ends of the Earth” story arc. Sounds like a pretty good idea in theory doesn’t it? Problem is, somewhere between idea and finished product, something went wrong and what we are left with is arguably the worst issue of this series to date.

The basic premise of this issue is that Spider-Man is tasked with marrying/protecting Princess Lenka of Symkaria, who is currently being hunted by Doctor Doom. Lenka was to be set up in an arranged marriage with Doom to ease tension between Latveria and Symkaria, but because of her mystical powers Doctor Strange and Silver Sable smuggled her out of the country and into America. Lenka is a huge fan of Spider-Man, despite being in love with another man, so Strange and Sable try to get him to marry her. With Doom hot on their tail, they don’t have very long to get things done, but needless to say Peter has his reservations.

The plot doesn’t sound all that bad when you read it in one big chunk, but the dialogue itself and the way the issue is paced is really off. That off feeling is multiplied when you realize that this is also acting as an epilogue for Ends of the Earth and the epilogue parts of the book are very thin and don’t offer any reason for a person who doesn’t read Avenging Spider-Man to pick it up. While Slott is listed at the top, it’s actually Ty Templeton who writes the book and it definitely shows. Slott gives the occasional smirk-worthy line and you can really tell when it’s him not Templeton writing, but still the book feels overly heavy and not all that satisfying.

I’m no art expert but in my opinion this art is atrocious. Spider-Man looks misshapen and his head varies from too small to alien sized, Sable looks lumpy and her facial design wildly varies from panel to panel and some bits of other characters seem unfinished in different panels. I mean Captain America has blocks on his head and Hawkeye has a two foot forehead! Now usually I can forgive sub-par art as long as you can get a good read on what the characters are feeling and doing in each panel but even that was confusing. I’m pretty sure Matt Clark and Sean Parsons are otherwise good artists but they were not on their A-game with this issue.

Avenging Spider-Man #8 is a mess. The story is paper-thin, the art is atrocious and I actually had to put the comic down on a few occasions to go read something else. It’s a shame really when you think about it since its  had some of the better single issue stories in recent memory. I’m not sure where things really fell apart but when they did, they really did. It’s not the worst comic I’ve ever read, trust me on that one, but it’s disappointing for anyone who is a fan of the series and certainly not worth the four dollars I spent on it.