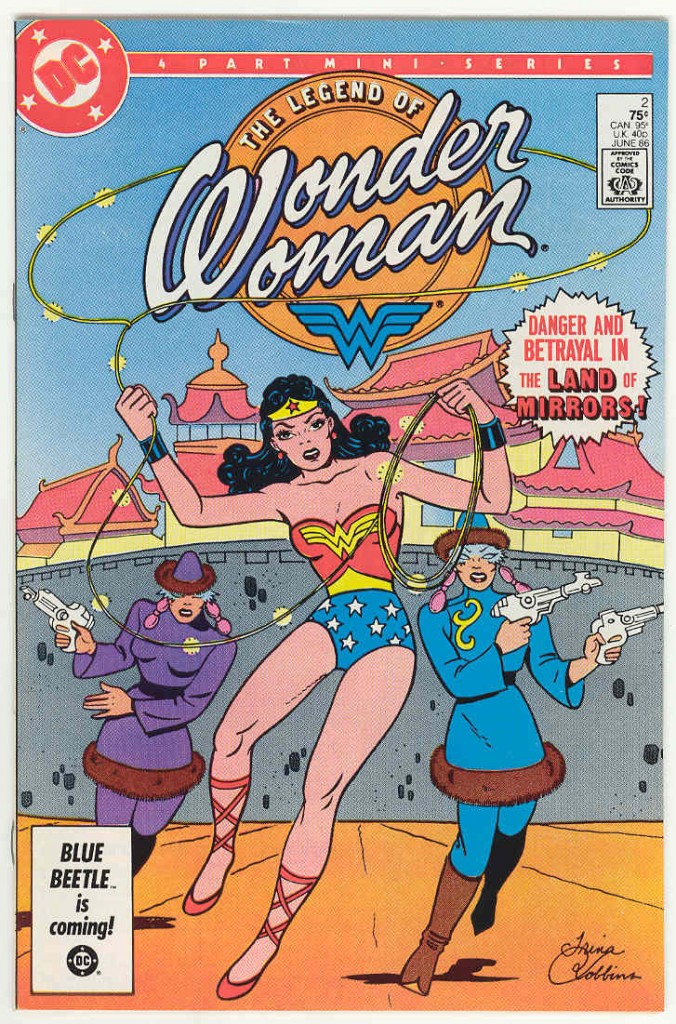 Tales from the archives

The Legend of Wonder Woman

Welcome to what I hope will be a sporadically on-going, though slightly more than occasional, exploration into the musty recesses of my library, where-in is contained the Wisdom of the Ages—Golden, Silver & Bronze! Looking back on that sentence, perhaps I should have written Wisdom of the aged—well, moving on, I think that it will be an entertaining journey, and if I perform my Sherpa duties properly, I can guide you toward uncovering some lesser-known gems, or the re-discovery of a few old favorites; on top of that—and I can hear my father’s voice as I type this—I’ll clean up the back room, and finally re-organize my collection.

For our first “delve”, let’s set the Way-Back Machine for 1986, and the aftermath of Crisis on Infinite Earths. (As I’m lazy and don’t want to have to keep typing the whole title, I’ll call it…) Crisis, with it’s dissolution of the DC Multiverse, was quite possibly the biggest event in the last 30 years of comics, but the biggest question to emerge at the time was “What next”?  The re-booted “Trinity”: The Dark Knight Returns and Batman:Year One by Frank Miller, The Man of Steel by John Byrne, and the George Perez Wonder Woman were all rightly praised as bold, new takes on these Titans of modern mythology. Of course, these stories are not “in continuity” any longer, as DC has ret-conned and re-re-booted… I don’t even remember how many times since—I lose track sometimes, sorry.

What is sadly neglected in discussions regarding the post-Crisis DC universe is that before the Perez Wonder Woman saw print in 1987, there was the delightful 4-part mini-series The Legend of Wonder Woman by Trina Robbins and Kurt Busiek, which I have just re-read in preparation for a future Talking Comics podcast. Certainly due to what has transpired in the comics world in the years since, I find myself to be even more smitten with this tale than I was at my first glance at the cover in 1986.

Ms. Robbins’ had been an elemental force in the underground comics scene of the Sixties & Seventies with the publication of the first all-woman comic book It Ain’t Me, Babe Comix, as well as being one of the founding “mothers” of the anthology Wimmen’s Comix. Beyond that, she was also a comics historian of the highest order, so when DC editor Alan Gold called soliciting her interest in creating a Wonder Woman mini, her response was “You understand, that I don’t want to do the contemporary Wonder Woman? If I draw Wonder Woman, I want to draw her in the Golden Age style of H.G. Peter” (This is from Ms. Robbins afterword to Issue #2). To all our good fortunes, Mr. Gold agreed, and we were off to the races.

Seeing the cover of the first issue of The Legend of Wonder Woman on the racks at my local comic book store was akin to being back in the Golden Age; Ms. Robbins had completely captured Harry Peter’s simpler line-work, but added her own sense of more modern cartooning to the mix. The story, co-plotted by Ms. Robbins and written by Kurt Busiek, picks up a very dangling plot thread from the conclusion of Crisis.

As the story opens, we’re witness to a distraught Queen Hippolyta organizing Diana’s things for storage in the wake of her death—actually, her return to the mystic clay from whence she arose. Finding a Magic Sphere, the Queen uses it to cast her gaze backwards in time and space to an adventure of Diana’s from the early 1950s.

Atomia (an actual WW character from the Forties) is gathering Uranium for a process that will cause her sub-atomic galaxy to expand and engulf the Earth, and while she’s at it she kidnaps dozens of people (Steve Trevor included—he was always such a damsel-in-distress!) to act as slave labor on the project. Diana, with Etta Candy’s precocious cousin Suzie in tow, sets out to make things right. I’ll leave you to uncover the myriad delights of this tale for yourselves, but suffice it to say that this loving homage to the original creators of Wonder Woman, William Moulton Marston and Harry G. Peter, was just the ticket after the sturm und drang of the Crisis that preceded it, and despite what to some uninformed eyes would seem to be simplistic or cartoony art, it is in fact, as was the original, a richly textured work, with fantasy adventure alongside a few life lessons. The capper to this fine series is an epilogue that contains more emotional punch-to-the-pound than half-a-dozen other “events”, and as a long-time fan of the Amazon Princess, this impactful conclusion is one of my favorite moments in Wonder Woman’s long, but unfortunately spotty history.

Sadly, DC has not seen fit to reprint The Legend of Wonder Woman as a trade paperback, but copies of the original issues #1-#4 are readily available at larger comics shops, conventions, and of course, on the old interweb—that is what it’s called, isn’t it?

ADDENDA: Trina Robbins would re-visit the Wonder Woman universe, by writing, and appearing as herself in the 1989 Annual, and as writer for the highly acclaimed 1998 Special Wonder Woman: The Once and Future Story, illustrated by Colleen Doran, which deals with the important subject of the prevention of spousal abuse.

In the mid-1990s, Mike Deodato’s thong-wearing “bad-girl” version of Wonder Woman would prompt Ms. Robbins to condemn the depiction as a “barely-clothed, hyper-sexual pinup”.