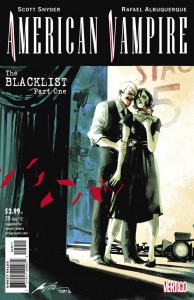 Let me start by saying this: If you aren’t reading American Vampire, go to your local shop pick up trades and single issues to catch up. It’s not necessary to know the entire back-story to jump into this issue, but you’re missing out on one of the best books of the past few years. Now, Scott Snyder and the regular AV team are reunited on the main series to start the new 1950’s arc The Blacklist. This is the first time that we will see the team tackle the same era twice in a row, and they have built up to a summer blockbuster type of story. Pearl retakes center stage, and Henry is left in an extremely fragile state after he was attacked a few issues back. Turns out the remnants of the coven Pearl dismantled in the first arc is taking vengeance on her by any means necessary. The Vassals then recruit Pearl to hunt down the Hollywood faction and, in return, they will do all they can to bring Henry back to health (and poor Henry needs all the help he can get). We get to see more of what Henry’s humanity, and in a way, vulnerability does to Pearl in #28. She may be a finely tuned killing machine with few weaknesses, but he is but a mere man and her sole link left to her humanity. The Blacklist looks like it will play this duality like a fiddle, as Skinner Sweet (the poster child of letting the monster take over) is reintroduced as Pearl’s partner. This issue boasts one of the largest casts of returning characters we have seen in American Vampire, and, of course, Skinner will prove to be a major player here as well. Scott has the pacing for this series down to a fine science. This book has never sacrificed character moments for action and it doesn’t here either. The Blacklist looks like it will shake out as one of the more action heavy arcs we have seen, but there are still moments where you genuinely feel for Pearl in her predicament.

Rafael Albuquerque is one of the best in the business. He is one of few people in this business that can allow Scott to do less with the inner monologues he is so known for, and it is because through his work he is able to convey every possible raw emotion you could expect; not to mention, he can conjure some of the most jaw dropping brutality in comics today. Everything is so well lined (and kudos to the inkers on this book who bring a very distinct look to American Vampire) and clean that you never question what is happening on a page. There is a moment in which Pearl finds out she has a partner for her mission– and I never thought I would ever be able to see what it would look like if a vampire saw a ghost—but he nails it. If I could blow that panel up and hang it in my room I would in a heart beat. I can’t say enough good things about what the art team does every month when they are all together.

Vertigo has had a history of finding diamonds in the rough like Scalped, Y the Last Man, and Fables. American Vampire is no different. The creative team has given us something that is beautiful, twisted, and terrifying all at the same time. This series truly is one of the books that should not be missed in your weekly pull. By now, you should know that Scott Snyder doesn’t write stories that he doesn’t put his heart and soul in, and Rafael Albuquerque is able to match him tic for tac with his art. God forbid it be any time soon, but when this series is over we may be able to look back and say: This is one of the greatest comic series of all time.

Buy it- In case you haven’t figured out by now I absolutely love American Vampire. I never go into a new arc with expectations, but I am always certain it will be quality work. American Vampire #28 is a start to what looks to be an action packed arc with plenty riding on it when it comes to the future status quo of the series.