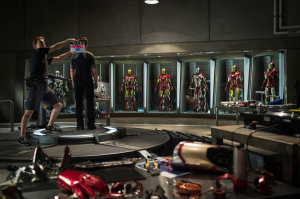 The news we’ve all been waiting for has finally landed. I just got an email from Disney announcing that the panel for the long anticipated Iron Man 3 will be on the stage at Hall H. Since Iron Man 2, the news about Jon Favreau leaving the movie series, and Marvel’s The Avengers, we’ve demanded more information about this latest installment and now we’re going to get our chance to listen from the guy in middle of it: Kevin Feige. Read on for more information!

MARVEL STUDIOS will be hosting its Hall H Comic-Con panel on Saturday, July 14 from 6:00pm – 7:00pm. Marvel Studios presents Iron Man 3. Join Producer Kevin Feige and special guests as they provide an inside look at the ever-expanding Marvel Cinematic Universe.

We’ve been on the edge of our seats looking at information about this film. We’ve also gotten a lot of crazy rumors. For a few days some actually thought Norman Osborn might even be in on this, never mind Iron Patriot. This would be our first big chance to hear real information and get to peek at some footage from the movie. Granted production isn’t that advanced for Iron Man 3 but we might get something, which is entirely better than nothing.

Kevin Feige is also a brain attached to the rest of the Marvel cinema universe, and we stand to get some information on some of the upcoming projects; especially the one mystery movie everyone is trying to figure out. Personally? I am rooting for Black Panther to get it, but I won’t be sad either if Giant Man/Ant Man/Hank Pym gets it either. Honestly? If we get to hear about Guardians of the Galaxy, hopefully featuring Rocket Raccoon, that will be the best possible outcome.

Stay tuned for more details on SDCC, Marvel, and Iron Man 3! See you at Hall H!