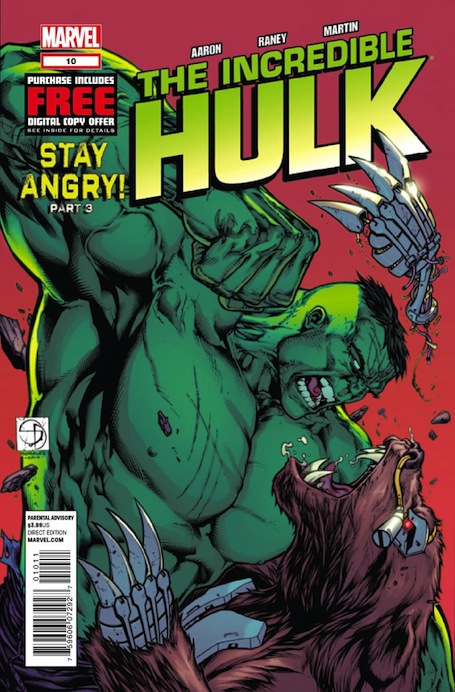 I admit to being a newcomer to this latest incarnation of the Hulk. But immediately upon opening the cover and seeing the new status quo, I was intrigued. The Hulk is now in control, and is the new “default” state of the Banner/Hulk duo…assuming he stays angry. Which, of course, is the title of Jason Aaron’s latest arc, “Stay Angry”.

The setup allows Aaron to tell single-issue stories linked by an overall plot thread. At the beginning of the arc, The Hulk awakens/transforms after a period where Banner was in control, unsure of what Banner was trying to do. This dynamic has continued throughout the arc, with each issue seeing the Hulk awakening in a new environment where he has to try to piece together Banner’s ultimate goal based on a frustrating sparsity of clues.

The first two issues saw him face drug-dealing dog men in the desert and drunk Atlantean rednecks at the bottom of the ocean. This latest issue sees the Hulk stuck in space. He ends up on an abandoned Soviet space station where he fights, among other things, cybernetic bears.

What’s great about these single issues is that they’re like short stories. Some of these ideas might not have sustained a whole arc, but they’re perfect for single issues, and it’s nice to see an idea play out almost as a self-contained story.

Of course there’s a reason for all of these adventures, and it’s clear that Banner has a plan. Just what that plan is, though, is unclear. And as we all know, Banner is the better thinker of the two. So in a way, the Hulk is the underdog, and it’s easy to be in his corner.

Aaron also works with different artists for each of these issues. Like the previous artists in the arc, Tom Raney does a great job here, illustrating the creepy interior of the space station and drawing a mean-looking bear. I’m not in love with his take on The Hulk, but it’s not bad by any means.

“Stay Angry” has been a lot of fun so far and has allowed Aaron to play with some interesting ideas while laying the foundation for Banner’s mystery plan. The Incredible Hulk #10 continues that trend, telling a neat little science fiction tale that the Hulk helps to resolve. A lot of fun and worth checking out, especially if you’ve been enjoying Aaron’s take on the character. (Also, the next issue has Kraven the Hunter)