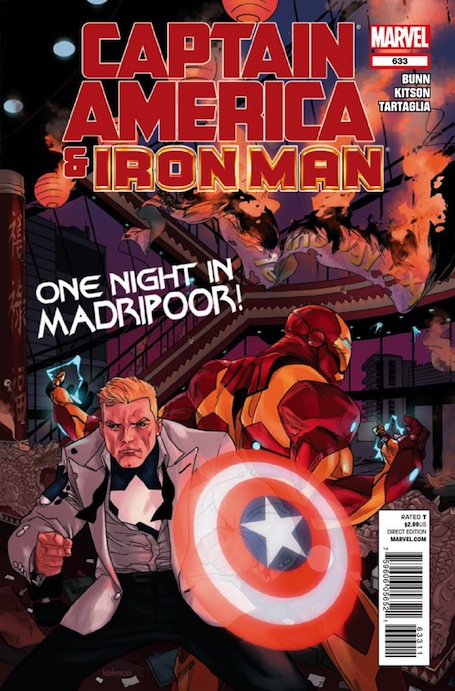 I was intrigued when I read that Marvel was going to give Captain America a team-up book of sorts. And, coming off of my Avengers movie high, I snapped up Cullen Bunn’s first arc with Captain America & Hawkeye. While there were some nice elements to the arc, it mostly dealt with second rate villains and I couldn’t get quite excited about Cap and Hawkeye fighting weird dinosaurs in a subterranean cave.

So I was looking forward to Captain America & Iron Man which promised Madripoor, and more color. And surely with Iron Man involved we would need to have more interesting threats?

Well, with the first issue now out, I’m optimistic for the rest of this arc. We open with Cap and Iron Man in Madripoor attending an arms convention. Tony Stark is there openly, as a former arms dealer, though he tries to get his audience to think beyond weapons applications. It seems an odd fit since Tony has moved away from the arms dealing for a while now, but with the movies being fairly recent, I’m willing to overlook this. Steve Rogers is there undercover, hoping to dig up information on the mysterious Kash (Kashmir) Vennema, the villain behind the last arc’s shenanigans.

Seems simple enough, doesn’t it? Well, as you might expect, things go very quickly to hell. Batroc the Leaper and some of his colleagues show up and they’re not the pushovers for Cap and Iron Man that you might expect. Not with a few other twists thrown into the mix.

This is definitely more of what I was hoping for from this title – some fun, some threatening circumstance. With this arc Cullen Bunn seems to be going for something more colorful, once more pulling from the lesser used Marvel villain stack, but this time going with something more interesting, to me at least.

And say what you want about Batroc, but he’s an old school cap villain and it was nice to see him used somewhat effectively here. It’s still unclear what Bunn is building to, and who Kash really is (and who she works for), but so far I’m willing to go along for the ride.

Barry Kitson handles the art chores and does a decent job, almost channeling Gary Frank in some panels. I really like his Batroc, though that may just be because of the design.

The big question I have is how does this fit into the overall Avengers storylines? Why is Cap investigating these things with just singular backup? One of the problems with previous team-up books is that the stories didn’t seem to pack the kind of weight that the mainstream titles did, and that seems to be the case here as well.

I’m calling this one cautiously optimistic. If you felt Captain America & Hawkeye was a little lackluster, you might want to check out Captain America & Iron Man. It seems to capture a more colorful, bombastic feel. It’s only the first issue of the arc, but so far it seems fun and there’s still the mystery of Kashmir Vennemar to figure out. It’s early days, and this all could fall flat, but I’m hoping Cullen Bunn is building to something better here.  much of this issue is set up, but I’m cautiously optimistic about it.