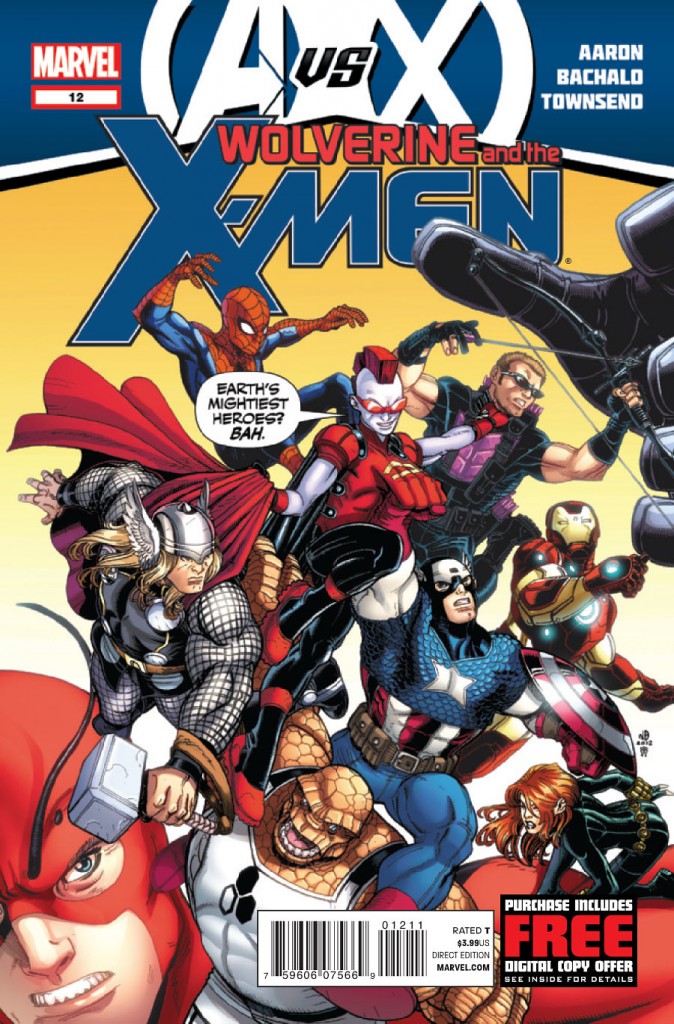 In this issue of Wolverine & The X-Men, Wolverine stabs one of his students. Yes, in the series that started with Wolverine and Company opening the Jean Grey School of Higher Learning in order to give gifted youngsters the opportunity to just be gifted youngsters in spite of the wicked world, the headmaster himself stabs Kid Gladiator, and then lays on some battle-snark.

Now, perhaps we’re supposed to just accept the teacher-student violence as another battle in the midst of the AvX warfare, but this moment in issue #12 was just one in a gaggle of bizarre out-of-character moments and empty smash-em-up action sequences. It’s almost as though the problems that plagued the first 5 issues of the core Avengers Vs. X-Men series—poor characterization, weak artwork, haphazard storytelling—have infested the latest issue of Wolverine & The X-Men. Considering the stellar character development and storytelling that we’ve seen in Jason Aaron’s work on the series, issue #12 is disappointing on several levels.

First, what the heck is up with Hank McCoy!? After a truly tragic character beat in Avengers Vs. X-Men #6, the good doctor is suddenly all too eager to blast holes in his “oldest friend’s” face. For someone who was portrayed as regretful and lost just last week, the Beast we see in Wolverine & The X-Men #12 comes off as a front-line Avenger, ready to make sarcastic quips and punch his former friends. Similarly, Hope Summers seems to have joined the Avengers-team proper as they skip, hop, and jump around the world. According to the recap page, the Avengers are fugitives and Cyclops has sent Rachel “The Hound” Grey on the hunt for Hope. But since when was Hope chummy with the A-Team? Readers of Avengers Vs. X-Men #6 are going to be confused to see Hope running around with Earth’s Mightiest. What happened to the Scarlet Witch?

Nevertheless, there is some of that trademark Aaron flare. Rachel “Not My Future” Grey is the focus of the issue, and she’s given some fantastic moments in terms of her character and her general bad@$$ery. Not only do we see her motivations for choosing Cyclops’ side in the fight, but we’re reminded that the horrifying future from whence she came is not so far away. We also see her beat the crap out of Captain America and take it to Thor. Which is pretty rad.

The secondary focus of the issue is Kid Gladiator (before he gets stabbed by his former teacher). Aaron created Kid Gladiator, and he gives the character some very funny, very impressive moments across the issue. One of the best moments this week features the ostentatious Kid Gladiator, the mighty Thor’s hammer, and the word “wiggle.” The end of the issue (featuring a fully recovered Kid Gladiator in the back of one panel) returns Wolverine & The X-Men to the Shi’Ar storyline from last issue, and hopefully it returns the book to its previous awesomeness.

For those interested in seeing the X-Men getting the upper-hand over the Avengers (especially considering the latter beat on the former for the first 3 months of the crossover), this issue does provide some nice action. Chris Bachalo’s artwork has always been divisive. I’m a fan of his frenetic panels and exaggerated style. There are some spectacular moments in this issue, including a “heroes assemble” two-page spread early on and some extraordinary images of the aforementioned Rachel “Woman Warrior” Grey. Bachalo’s Iceman is also ridiculous. Still, if you’re not a Bachalo fan, then you’ll probably continue to not be a fan. Where some readers see kinetic action, others see muddled imagery; where some readers see brisk pacing, others see constricted paneling. With Bachalo in particular, it’s a question of taste. Unfortunately, artwork is crucial to enjoying comics.

I understand what this issue is about. Wolverine’s dream about creating a better world for the youth has been compromised because of his choice to follow the Avengers into battle. This conflict is mirrored in Rachel’s discomfort with hunting Hope. Rachel’s decision at the end of the issue to let Hope go suggests Rachel still believes in Wolverine’s mission, and Wolverine’s actions against Kid Gladiator suggests that he’s lost sight of it. I’m sure this dichotomy will come back in later issues in Aaron’s run, partly because I trust Jason Aaron’s grander mission, and partly because Wolverine & The X-Men has heretofore been an exceptionally amazing comic series. Fans of Rachel Grey, Chris Bachalo, Jason Aaron, or Avengers Vs. X-Men may want to pick it up, but Wolverine & The X-Men #12 is yet another hiccup in the larger AvX event.