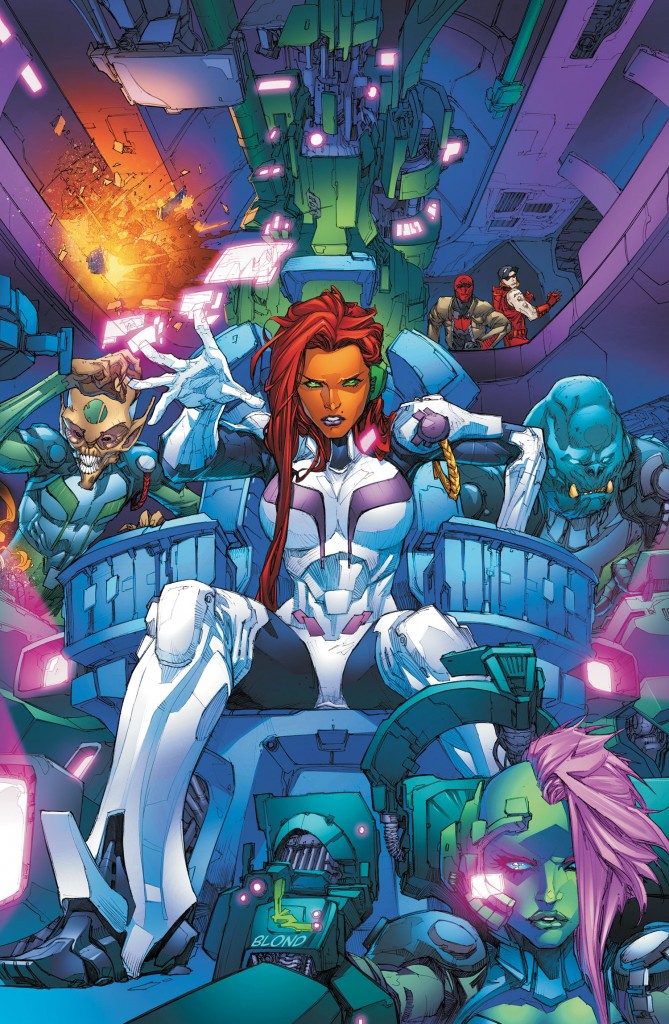 Red Hood and the Outlaws #10

All Jason Todd wanted to do was go on a date and have a good time while Kori and Roy spent some “quality time” together. Is that really too much to ask? After dealing with The Untitled, Essence, Suzie Su and a Talon after Mister Freeze you’d think that they could have one day of silence. But, as Jason’s luck would have it, just as his date is coming to a close an alien attacks the hotel and causes a ruckus. Turns out that the alien is a former friend and colleague of Kori and is here to bring her back to Tamaran to stop an evil force. Jason and Roy decide to tag along but when they reach Kori’s ship The Starfire, they realize that Jason’s date Isabel must have accidentally been transported there with them. Kori promises to make sure she stays safe but just as she says that a large alien fleet attacks the ship.

It’s at that moment when we reach the big problem with this otherwise unique and hilarious issue: it’s only half an issue. The other half is the start of a back-up series involving Essence and her continued battle with The Untitled. While I AM interested in seeing what happens with The Untitled, it feels out of place in relation to the rest of the current storyline. The sudden shift in tone, art style and a lack of closure with the main story is definitely jarring and leaves me feeling a little cheated out of my three dollars. It’s a shame too since the main story has one of the stronger and more thought out plots of the entire series so far. I really like the look of Kori’s ship and her crew, Isabel delivers some of the biggest laugh out loud moments I’ve read in a while and I’m really excited to see where this arc goes. As far as the Essence story goes, it’s alright.  Not enough has really happened for me to shape a definitive opinion but what I’ve read so far has been fine.

The artwork by Kenneth Rocafort is as stunning as it always is. Rocafort and Blond put a ton of effort into the way things are put on the page and it shows. Whether it’s a single panel or a two page spread, the level of detail in Rocafort’s character designs and backgrounds are amazing. Whether or not you’ve been a fan of the series up to this point, the art has been something I think everyone can agree on. For the back-up story they brought aboard Ario Anindito on art, with Blond still doing the colors, and he does almost as good of a job as Rocafort. His art is a little smoother and cleaner than Rocafort’s art, but I’m happy to see that both stories have great art that’s worth checking out.

Red Hood and the Outlaws has been a series full of ups and downs and issue #10 has both. While the main story is well done and adds a lot of really interesting elements to the series, the inclusion of the back-up story feels tacked on and leaves the main story feeling abrupt in its ending without any real semblance of closure. The back-up itself is well drawn and interesting for fans who have been on board since the beginning, but for new readers it could definitely confuse them as to why their space epic suddenly changed to a story about a woman and her quest to take down The Untitled. I still recommend this issue for anybody who’s interested, but my recommendation comes with a slight hesitancy to it.