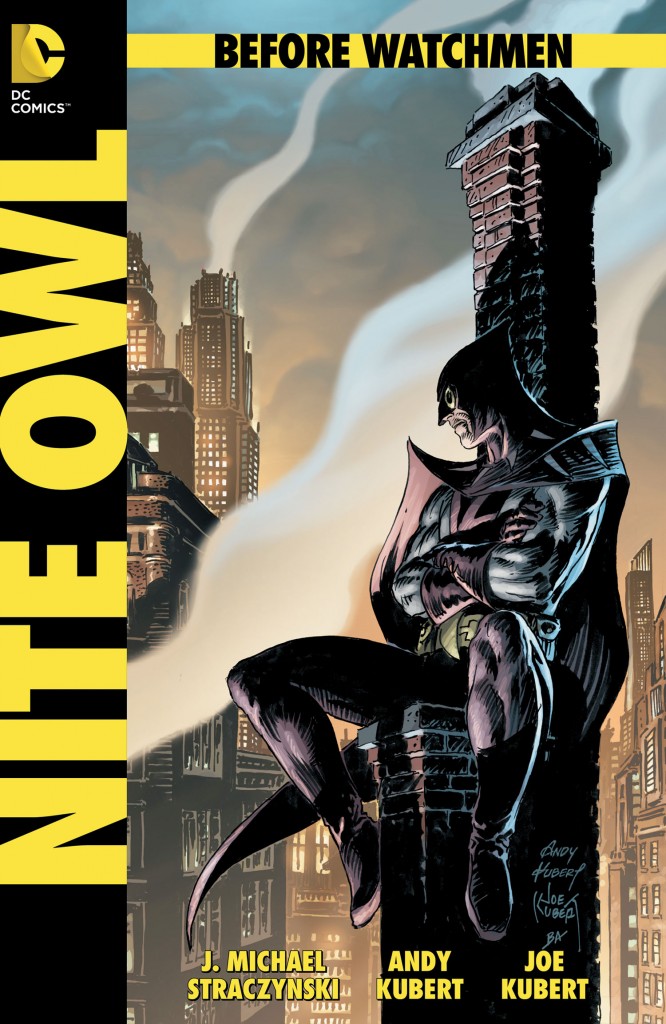 I’m not going to bury the lead here in any way, the run of good to great Before Watchmen outings has ended this week. For those venturing into stores and seeing that familiar yellow banding adorning the left side of your purchase, beware, you hold a bad comic book in your hands. Now, there are many different kinds of bad books. There are ones that are poorly conceived, ones that are well conceived, but poorly executed and then there are books like Before Watchmen: Night Owl #1, that fail on almost every level possible. This foray into the past of Daniel Drieberg starts out okay, showing us how a young boy by force of will achieves his dreams, but by its ending it sinks to nothing more than a pale imitation of its predecessor, and a downright stinker regardless of pedigree or expectation.

Nite Owl is the tale of the second man to don the cowl, Dan Dreiberg, a wealthy kid who obsesses over the first Owl and who has a predilection for nifty gadgets. The opening scenes, depicting Dan discovering his hero’s identity and, consequently, training to replace him, are a solid enough origin for the character, but these scenes also feel short and lack any real struggle on our main character’s part. But, being a positive person, I surmised that perhaps the protagonist’s great struggle would come later, and I let myself get excited for the tale of the second Nite Owl. That excitement was unfounded as its when Dan puts on the costume for the first time that this book completely falls apart.

The three previous entries in the Before Watchmen series have made sure to steer clear of any actual scenes from the original series, but not here. Writer J. Michael Straczynski made the choice to recreate the first meeting of the “Crimebusters” and it’s a huge misstep on his part. The use of this exchange does nothing to further Dan’s character, and in fact it does nothing to illuminate anyone’s character. It’s a lazy rehash of previously written work that takes up a sixth of the book. At $3.99 readers should expect, forget that, demand, that there at least be original content in the stories they are buying. The way JMS uses this scene is unacceptable, but the fact that it is not the most upsetting thing in Nite Owl #1 speaks volumes about it’s quality. The most glaring weakness of J. Michael Straczynski’s effort lies in his treatment of Watchmen’s most iconic character, Rorschach.

In the original series he and Night Owl were the physical manifestation of Batman’s inner duality. Dan was the gadget wielding, cowl wearing rich man and Rorschach, the dark, driven and sociopathic detective who always seemed on the edge of sanity. But, here JMS has written him as a joke, a man who quips about Nite Owl’s bad sense of humor and who uses his famous “hurm” like a bad catch phrase. None of it feels like the character that exists in Moore’s work and, considering how close to Watchmen this issue of “Before Watchmen” is set, it makes absolutely no narrative sense.

VERDICT
Skip It – Before Watchmen: Nite Owl #1 is a poor imitation of, not just its predecessor, but of a good comic book. Its violence feels out of place, its attempts at humor flat, and its use of these classic characters completely misses the mark.
Andy and Joe Kubert’s work, which is good, but not great, does nothing to redeem this piece of slop. Avoid it.