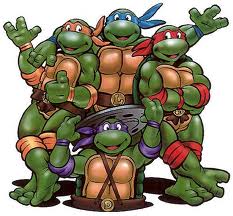 That’s part of the opening song from the 80’s cartoon that I and many other folks grew up watching. Now days, I’m trying to collect the entire series (I’ve already got all four films).  Not until a few years ago on Free Comic Book Day when I entered my local comic shop and picked up a free copy of the 25th edition of the first issue of the Teenage Mutant Ninja Turtles comic book that I realized that the 80’s TV show wasn’t the beginning of the turtles. It was only part of the story. 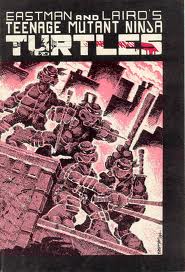 Teenage Mutant Ninja Turtles was created by Peter Laird and Kevin Eastman in 1984 in Dover, New Hampshire. The concept arose from a humorous drawing sketched out by Kevin Eastman during a casual evening of brainstorming with Peter.Using money from a tax refund and a loan from Eastman’s uncle, the young artists self-published a single issue comic intended to parody four of the most popular comics of the early 1980s: Marvel Comics’ Daredevil and New Mutants, Dave Sim’s Cerebus, and Frank Miller’s Ronin. And that was the beginning of the story which through the years has consisted of toys, comics, TV shows-cartoon and live action, and five films-three live action, one CGI, and one cartoon (Turtles Forever)

Currently, there’s a cool new comic book series that debuted a few months ago. It’s published by IDW and it’s a new take on the turtles but it’s still sticks to its classic roots while bringing a breath of fresh air.  There’s also a new cartoon series that will be debuting on Nickelodeon this year. For hardcore fans of the original comics, the fan made graphic novel Dawn Of The Ninja is an amazing project that you don’t want to miss!  These shellbacks-along with Master Splinter and the rest of the crew-are still striking hard and fading into the night.  So whether you grew up with “Go green machine!” or “It’s ninja time!” You gotta love being a turtle fan!