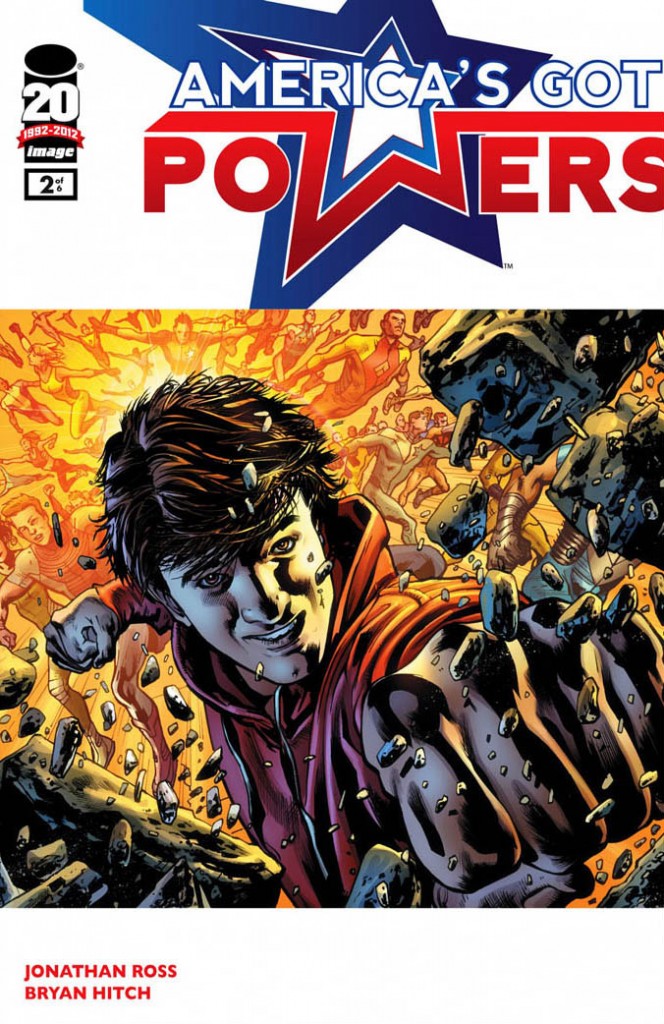 America’s Got Powers was a book I picked up knowing nothing about going into the first issue, but I was pleasantly surprised with what I got. Jonathan Ross sets up a story that has a lot of potential. We pick up right where the first issue left off, and we get to see the fall out of Tommy becoming a strobe light. Though no light is shed on what Tommy’s power is, he is immediately thrust to the forefront of the big wig’s plans. Some want him to fight for ratings; others want to test him to figure out just what he does. We get a much deeper story than what could have been with issue two, as we build on the big brother aspects of the organization behind the games, and a twist on the super powered kids near the end of the book.

The art fits a super hero story well. Hitch is able to carry action extremely well, and throws in some really gruesome panels of decapitation and general violence amongst teenagers to nail the action pieces. In the time the characters aren’t training to kill one another, we get some good character and relationship building—and Hitch is able to evoke the right emotions in such times. The only gripe with the art in the book, and it may be broken down to just a design flaw, is the girl with the spikes and mandibles can be a little too detailed. I can’t honestly tell you what she looks like except she has porcupine-ish yellow and blue hair, pinchers coming out of her face, and what I think are tiger stripes. It’s something easily overlooked in the grand scheme of things, and doesn’t make the character any less relatable seeing as how she seems to be a genuinely good person.

The book follows on the heels of fairly popular media at the moment, coming out not long after The Hunger Games film. Comparisons will be made when two things so similar in initial premise are released in a relatively close time frame. I don’t want to say that they are identical in plot line, because they aren’t, but if things don’t deviate enough from the path in which we are lead to believe this will go, then I think it may end up being a book that is regarded as an idea piggy-backing the success of someone else’s work; however, I believe there is more than meets the eye to this book and am waiting patiently to be floored by the first big curve ball Ross and company throw our way.

Buy it- America’s Got Powers looks like it will be a series that is entertaining, if nothing else. There are multiple layers to the story Ross is building, and its accompanied by art work worthy of you would expect from a super hero book. To this point there hasn’t been anything that couldn’t be predicted, but the anticipation of having this turn out not as I expected is enough to keep it in my reading list.