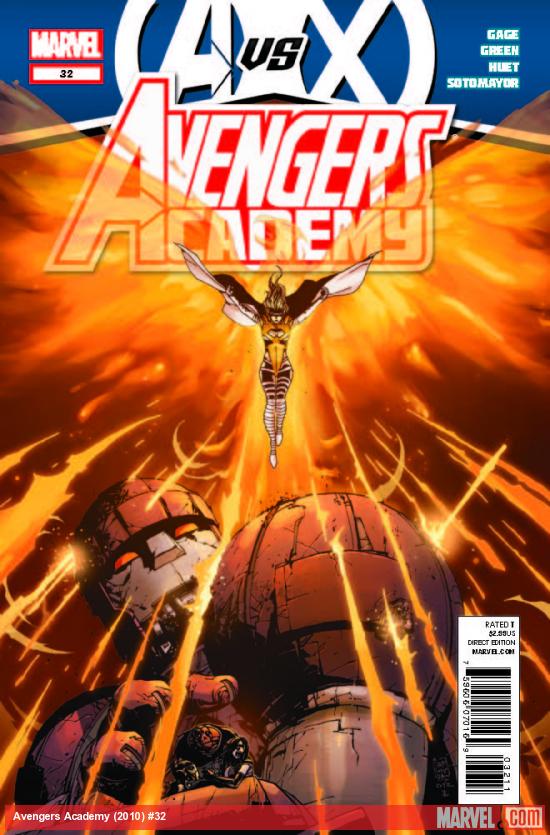 Since the events of Fear Itself ended, Avengers Academy has been one of the most consistent books Marvel puts out every two weeks. With a wide roster of characters, interesting stories and awesome action scenes, I can always count on this book to deliver. That’s not to say this book is perfect by any means, the recent Runaways crossover fell short of expectations and left me feeling a little empty, but more often than not this book is three dollars well spent and an enjoyable read from start to finish.

Issue #32 takes place during the events of Avengers vs X-Men #6, focusing on the relationship between Juston Seyfert and his Sentinel. X-23, who is still conflicted about her place in the world, believes that Juston’s Sentinel still poses a threat to all mutants. Juston is adamant that his directives have been reworked so that “Destroy All Mutants” is his lowest priority,  but X-23 is still wary. After a heated discussion things seem to go back to normal, but when Emma Frost, now powered by the Phoenix Force, arrives to destroy Juston’s Sentinel, things go awry pretty quickly.

One of the places this book has shined, especially since Avengers vs X-Men has started, has been in its character development. Gage has done a fantastic job giving each character a unique personality and distinct voice, whether they get two lines or twenty lines. Each time they introduce a character or dedicate an extended amount of time to someone, especially a character who audiences might not be as familiar with, you really get an insight into what makes them tick. Even Juston’s Sentinel has a personality and while most of the time it’s spouting “Destroy All Mutants” at the worst possible moment, in this issue you really get a chance to see just how much he cares about Juston and how self aware he really is. The writing is always top notch and this issue is no different. On a side note before I move on: the ending of this issue has set up one of the best mental images I’ve had in a long time and I’m itching to read the next issue.

The art is standard Avengers Academy fair for the most part. It’s colorful, bright, detailed and easy on the eyes.  It’s worth noting though that Green II and Huet do a great job with facials this issue. Seeing the looks on Juston, Emma and X-23’s faces throughout the book added extra depth to the dialogue and made for some pretty great reactions when things start getting heavy later in the book.

Avengers Academy has been my favorite Avengers vs. X-Men tie-in since the event started. Avengers Academy #32 continues that trend in arguably one of its best issues to date. With great characterization, a tense plot with fantastic build-up and an ending that makes me incredibly excited to read the next issue, this is not a comic to be missed. Acting as a great jumping on point for new readers, you owe to yourself to pick this book up if you haven’t been already.