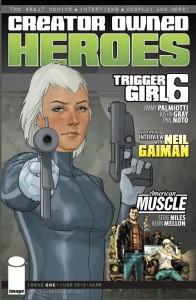 The comic book industry doesn’t have a great reputation for taking care of it’s creators and recently the ‘big 2’ are bigger than ever with movie deals and all the available accessories. If you’ve been paying attention, you’ll notice some names in the biz making it known that they intend to change all that. Creator Owned Heroes is the love child of a few of those names and their passion for creative control. The plan is for a 40 page monthly comic that features 22 pages of comics and 18 pages of magazine format material. Interested? I was too.

Creator Owned Heroes starts with a story by Steve Niles (30 Days of Night, Criminal Macabre)  called “American Muscle”. A group of muscle car driving misfits speed through a post apocalyptic terrain, seemingly having a grand time with it, while the reader learns about how the apocalypse happened. There seems to be a leader who’s current goal is taking his group to a promised land. I won’t give away the story, but it ends creepy; as is Steve Niles’ style.

The second story is the more futuristic, action packed “Trigger Girl 6”, by Jimmy Palmiotti (Punisher, Painkiller Jane) and Justin Gray (Jonah Hex, Powergirl). There is an assassin (or something) born of technology, her political target and a bad rap that precedes her. The art stands out here, colorful and sketchy, and the story builds just enough to make you wonder what the hell is happening.

These are both short intro stories, so don’t expect too much to be clear at this point, but I appreciate their individual styles and both of them left me wanting to read more. What makes Creator Owned Heroes really special is that it’s not just a comic book, it’s a magazine of sorts. The great stories are followed by a fun article on cosplay and costume design, notes from the creators, movie reviews and an interview with Neil Gaiman that feels like a comfortable chat over coffee.

Buy this one. Pre-order the next one. Creator Owned Heroes offers so much more than most and promises even better things to come. It’s more bang for your buck and your support goes directly to the hard working creators behind it. The prospect of a monthly issue that offers new stories, bonus materials and interviews between creators sounds like a win-win to me. I’m looking forward to more of it.