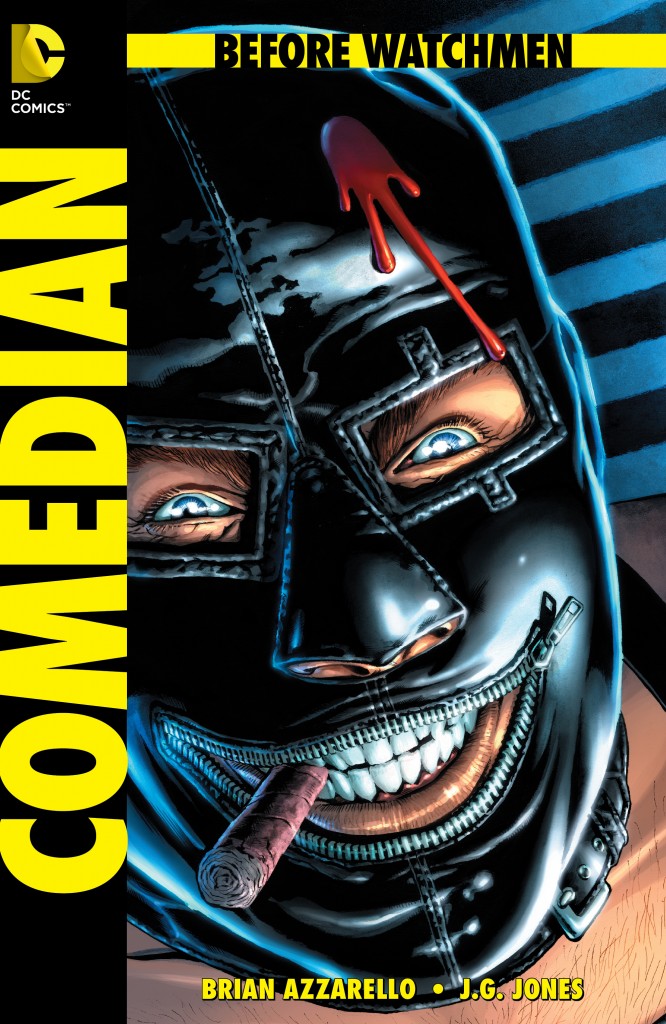 Before Watchmen: The Comedian #1

I’ve enjoyed the initial offerings in the Before Watchmen series quite a bit. The one problem I found with both Minutemen and Silk Spectre was that, despite the sharp writing, they lacked the punch needed to form a truly great first issue. The Comedian #1, by Brian Azzarello, suffers from no such problem. This is a book that forgoes retreading familiar territory and instead hits the ground running with a story that feels large in scope and yet deeply personal. I wasn’t particularly interested in the history of Eddie Blake before this, but after this outing, I’m ready to jump into the passenger seat and let Azzarello take me wherever he wants to go.

The Comedian #1 is in many ways exactly what you’d expect when you consider it’s titular character. The narrative is darker, the world grimier and the setting more political, but Azzarello also throws a few curveballs our way. The opening scene of issue one sees Eddie Blake playing football with the Jack and Bobby Kennedy, and this scene is just one of many establishing a deep emotional connection between the masked hero and America’s first family. This bromantic horse play is followed up by an electric exchange between Mr. Blake and Jackie Kennedy, which is full of so much tension and fire that you can feel it wafting off the pages.

Obviously, the first lady never  had a conversation like this, with a man like The Comedian, but Mr. Azzarello effortlessly places his protagonist into historical moments without it ever feeling forced or gimmicky. In fact, Alan Moore’s Watchmen was all about playing with the past, and The Comedian always seemed to be at the heart of it. So, it’s wonderful that this prequel follows suit in such an effective way.

The team of artist J. G. Jones and colorist Alex Sinclair bring the violent and dark world of Eddie Blake to life perfectly. Every panel and page is dipped in face obscuring shadows and it makes every character’s actions feel clandestine in nature. Sinclair’s colors are also a standout, as it seems every new scene has a starkly different pallet.

VERDICT
Buy It- Before Watchmen: The Comedian #1 is a book that comes out of the starting block firing on all cylinders. Writer Brian Azzarello has crafted an Eddie Blake who is familiar enough to feel in canon, but just varied enough to feel very fresh. He’s violent and a little loose with his morals, but he’s not the cynical horror of a man that we will come to know. It’s great character work by a great writer and I can’t wait to see where it all goes. You add to that stellar J.G. Jones art and you have a book not to be missed.