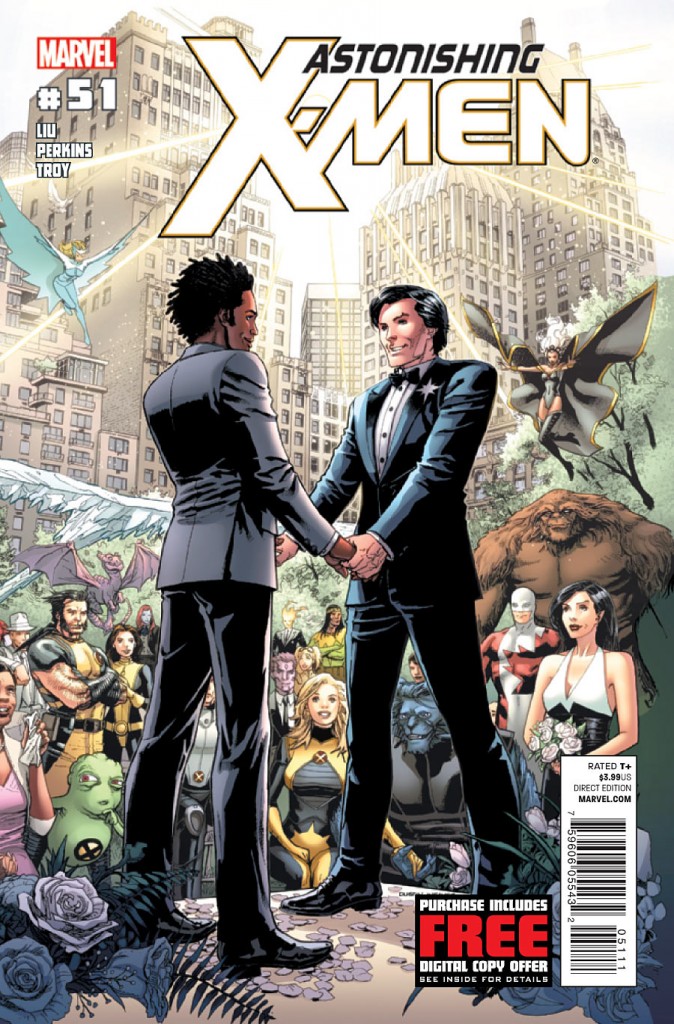 “Dearly beloved, we are gathered here today in this beautiful place to witness the joining of Kyle Jinadu and Jean-Pail Beaubier in marriage.”

Today was a rather special and significant day in the world of comic books, as we all were invited to bear witness to the forming of a legal marriage between two homosexual characters within the X-Men universe. Now certainly, gay characters have existed inside of comics well before this event, but this may very well be the first time that the unionization of two male characters has ever been so much a part of the public eye. Marvel went to some pretty great lengths to respectfully propose this event to their readers, and thus far the response has been overwhelmingly positive.

You see, it’s because an event like this needs to be executed with class. This is an important event for members of the gay and lesbian community, whether you’re into comics or not. This, in regards to the printed page, is history. And to the books credit, the story that’s contained in pages of this book reach beyond the wedding itself and delve into some pretty heavy handed themes. The mutant, Karma, has been revealed as untrustworthy and there is nothing more that hurts worse for the X-Men than to have doubts about their own teammates. If there is even one chink in the armor the entire army can fall. The problem must be sorted out. The enemy must be brought to trial.

Sitting down to get the full effect of this issue I decided to read all of the Majorie Liu written issues (Astonishing X-Men #48-50) leading up to this special occasion. It gave me a real sense of just how in love Jean-Paul and Kyle are with one another and I’d found their tale to be quite endearing and had never once doubted their affections or desire to be with one another. This is an important book not on for the gay and lesbian community, but also for the heterosexual community as well.

No one should ever be denied the opportunity to love. Perhaps this comic will open up some eyes and perhaps broaden a few minds on the subject of same sex marriage or relationships in general. We’re living in very cruel times these days, but as the saying goes. “Times, they are a changin’.” With pressures on today’s governments to allow more and more states to perform same sex marriages this book could not have come at a more poignant time. The comic book community is made up of all kinds of readers with all manners or preference and even some with wild fetishes. There isn’t a single reason why they shouldn’t be represented on a grand scale, no longer left to lurk within the shadows of shame. F that.

Okay, so is it a good book aside for all of this soapbox talk? Yes, it really is. The events of the previous issues never feel overshadowed by the big event as they are still very much a threat for the X-Men. In fact, it feels like the whole issue as if some characters are waiting for the other shoe to drop, which was a really nice touch. And you’re going to have fun at the wedding, I don’t care who you are or if you approve. There are so many special guests and cameos worked into Perkins art that you’d think this was Highlights Magazine: Astonishing X-Men Edition.

So, if I can say just one last thing. Buy this book. It’s important, it’s a great read, it’s a fantastic and tense arc, and you just might find yourself touched by the events that take place.

VERDICT: Read above statement ^ It kind of says it all.