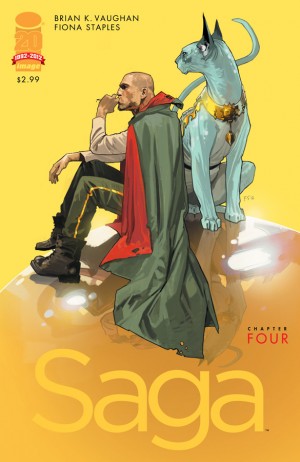 Brian K. Vaughn and Fiona Staples are back with another issue of their sci-fi series Saga. If you haven’t read up until #4, now is definitely not a good time to jump on board and now is definitely not a good time to read this review. Go through #s 1-3 and then come back to this. In the last issue, we saw Marko fighting for his life after being mortally wounded. In his delusional state, he whispered the name of his one true love and guess what? The name wasn’t Alana. So like, WTF, right? That’s definitely what’s on Alana’s mind. Alana has also bonded Hazel to a supernatural teenager nanny named Izabel and despite a lot of apprehension about that, it’s turned out pretty great so far.

I can’t say that I’m entirely too pleased with this issue though. It’s one of those sort of filler books, where not too much happens and it doesn’t really set anything too big up for the next issue, except for in the last two pages. Because really, what kind of comic would it be if it didn’t leave you wanting more in the end? There’s still enough story to keep you interested for the most part, but the side stories with characters, like The Will, take a lot away from Marko, Alana and Hazel’s journey. I WANT TO KNOW WHAT HAPPENS WITH THEM, DAMMIT. However, I am really digging the character of Izabel and if there has to be ANY side story or backstory, I would really enjoy seeing some more of her past.

Vaughn’s writing is, as usual, fantastic, but once again the real draw to this series remains the incredible artwork by Canuck Fiona Staples. This girl is on her way to superstardom in the comic book world. If you’re not reading Saga, you need to start checking it out, if for no other reason than because of Staples’ art.

VERDICT
After reading Saga #4 through a couple times, it doesn’t give me that feeling of needing more right away. However, I have been enjoying the quirkiness of the series thus far and I do think it’s something that people should be keeping up with. Brian K. Vaughn has proven time and time again that he is one of THE most relevant writers out there right now and years later, this series along with others like Y: The Last Man, Ex-Machina and even Runaways, will be remembered for his incredible work. If you haven’t been thrilled with Saga so far, I urge you to stick with it as I feel like soon, shit is going to be hit the fan and you won’t be able to put this series down.