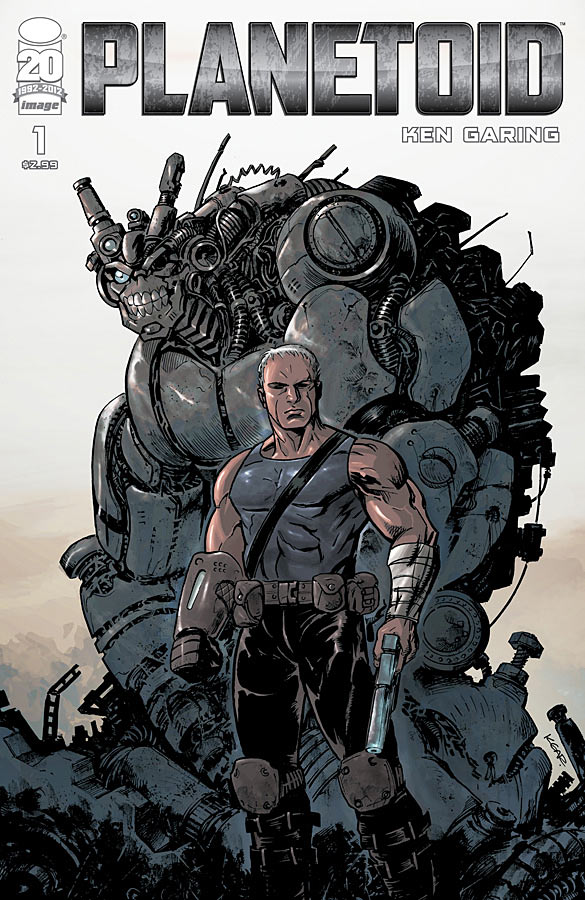 Silas is in a pretty bad way. After jettisoning himself into the cosmos for reasons I am not about to reveal here, he’s crash landed on a strange and seemingly uninhabited planet. With Ricter, an Interactive Analytical Assistant programmed to the circuitry inside of his suit as his only company, Silas must traverse this new planet if he has any hope of survival. It’s an odd planet for sure. It’s as if all of the space junk that we’ve shot into orbit over the years has all gravitated toward it, it collects around the planet like so many armies of tiny insects piled on top of one another. It’s not exactly a place you’d want to visit, let alone be marooned there with hardly a days worth of rations in your pack. Oh, and did I mention that there are giant mechanical monsters? Yeah, there’s that too.

I had a good time with Planetoid #1. The whole time I was reading it I kept reminding myself that it was one man that put this all together. Ken Garing  obviously put a lot of passion and thought into this comic as it immediately captures the feel of being isolated and left with little hope of survival. Granted, our main character looks and talks like a major, level-headed bad ass, but this looks to be a pretty harsh place to be S.O.L.

The environments within the book, though gritty and virtually colorless thus far (there’s plenty of black, brown, and gray for everybody), lend to the cold and desolate nature of this foreign planet. It gives you the notion that if you were to not be watching where you step you very well might cut yourself on a piece of jagged metal, that cut could become infected from the near-toxic atmosphere, and you’d be f*%$ed. I like it.

I’ve got to admit that I really don’t have anything negative to say about this first issue. It’s one of those books that I am very interested in seeing where it goes. It’s like when you read a #1 comic and at the end of it say to yourself. “Okay. You’ve piqued my interest. Now what are you going to do with it? How are you going to set yourself apart from all of the other books that have used this scenario?” So that’s really what I ask of Ken Garing and Planetoid as a comic I should spend my money on each month. So far, so good. And I’m very eager to find out what happens next.

Definitely check it out. I won’t tell you to run right out and purchase it but it is certainly worth a read. I’ll be keeping a close eye on this series as the mystery of the planet and the fate of Silas unfolds in the coming issues. I hope you check it out.