FacebookTwitterPinterest
This is a masterful work that manages the arduous task of bridging the to-date unseen gaps in the original story, all the while maintaining it’s tone and tenor, yet also bringing into play the perspective of the teen-age Laurie and her struggle growing up in the 1960’s as the daughter of “Sally Jupiter”, the original Silk Spectre. 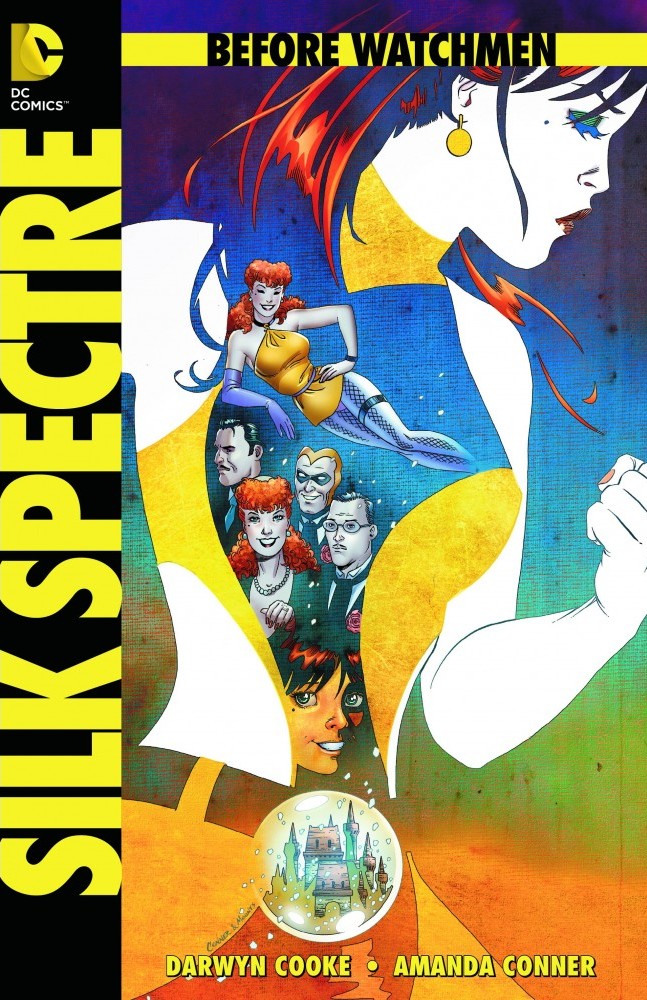 In my conversations regarding Watchmen, either the comic series or the 2009 film, the characters that seem to resonate the most for people are Rorschach and Nite Owl, with an occasional half-admiring nod to The Comedian. For me, the heart of the piece is Laurie Juspeczyk, the Silk Spectre, who serves as the grounding element for the more-than-human Dr. Manhattan. As neither the original maxi-series, nor the film, granted us much in the way of insight into Laurie’s past, the announcement of Before Watchmen: Silk Spectre both thrilled me, and gave me an “I’m not so sure about this…” moment, although the naming of the creative team on board, writer Darwyn Cooke and artist Amanda Conner (both favorites of mine), assuaged my trepidations somewhat.

Now, with book in hand, I can tell you that my fears were unfounded. This is a masterful work that manages the arduous task of bridging the to-date unseen gaps in the original story, all the while maintaining it’s tone and tenor, yet also bringing into play the perspective of the teen-age Laurie and her struggle growing up in the 1960’s as the daughter of “Sally Jupiter”, the original Silk Spectre.

Darwyn Cooke, most noted as the architect of DC’s “New Frontier”, and who also scripted Before Watchmen: Minutemen, is perfectly suited for this sweet/sour, wonderfully-nuanced tale. We revisit some touchstone moments from Watchmen, but from different “camera angles”, so to speak, with additions that enhance and enrich the human element that was at times lacking from the two Spectres the last time around. I’m particularly happy regarding the “Citizen Kane” opening sequence—‘nuff said.

The art by Amanda Conner, late of the regrettably-cancelled “Old 52” Power Girl, is some of the best work she’s ever done, which is saying quite a lot. Using a 1960’s style grid framework, melded with her more modern story-telling technique, Ms. Conner has created a book you’ll want to re-read, both for the depths of emotional content, and to search for details that you’ve missed. The highlights for me are the expressive faces that either make you smile, or cause your heart to ache for young Laurie, and although some reviewers have commented negatively about them, the “fantasy” panels had this reader grinning ear-to-ear.

Speaking of reviews (though you shouldn’t be reading Brand Ecchh reviews—stick with us!), as can be expected, this book, as has the entire Before Watchmen enterprise, was trashed before it saw print, as if it was the herald for the comics apocalypse. Here’s the straight truth—if you enjoyed the Alan Moore/Dave Gibbons Watchmen, you’ll find nothing here to put your knickers in a twist, just a well-told, beautifully illustrated gem of a comic book. My thanks to Ms. Conner and Mr. Cooke for a difficult job well done.

VERDICT: Go into this book (and Minutemen, too) with an open mind, and I truly believe that you’ll find it $4 well-spent!

TRIVIA: The Silk Spectre character is based on Charlton Comics’ Nightshade, with nods to other great heroines such as Tarpe Mills’ Miss Fury, the original 1940’s Black Cat (movie star by day, super-heroine by night!) and of course, the Black Canary, particularly in the mother/daughter aspect.

SEMI-RANT:  As always when discussing things Watchmen-related, I urge you to check out Mark Gruenwald’s Squadron Supreme maxi-series (also in TPB from Marvel), which was published a year before Watchmen, and covers much of the same territory– and quite well, too. Consider this my daily rant on the subject.  rrr