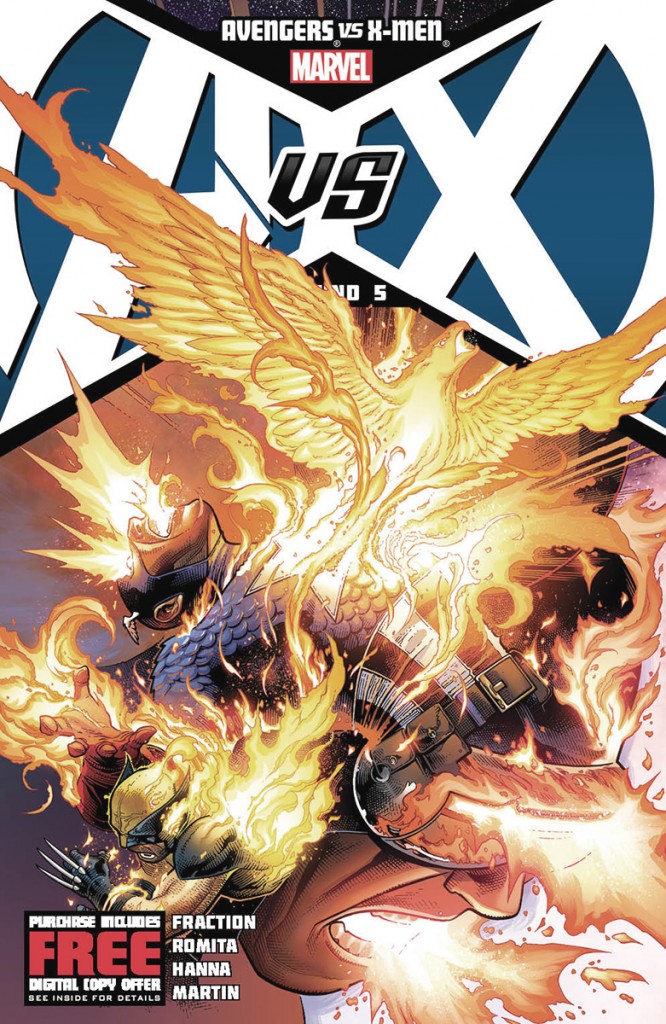 Avengers Vs. X-Men #5 was a phenomenal comic book. In fact it was everything I’ve been wanting from this event since the beginning. Matt Fraction has filled his book full of surprising plot twists and powerful personal moments. It’s a story with such thrust and energy that it makes the previous 4 (save for Jason Aaron’s issue 2) seem positively inert in comparison and there in lies the cause of the dissonance of feelings banging around in my head. On one hand I’m ecstatic to have this fantastic piece of writing in my hands, but on the other I can’t help but think, that if they were capable of this the entire time ,why has it taken so long to achieve?

Bob Reyer often talks about the phenomenon of “writing for the trade.” A term that denotes a creator who focuses, not on giving you stellar month to month experiences, but one who writes his/her story purely for the collected volume. This often results in issues of books that give us such little plot movement that they feel like they are simply treading water. Bob has a different frame of reference than I do as his prime comic days were filled with a kind of streamlined storytelling not often seen today. One only has to look at 1981’s heralded X-Men tale “Days of Future Past” ,which covered in 2 issues what most arcs today would take 6-8 to accomplish, to see the vast difference in philosophies.

I’m not saying that I believe all comics should be break neck paced narratives. In fact as good as “Days of Future Past” was, it did offer way too much exposition for my liking and I found the amount of words on the page to be downright tedious. Chris Claremont and John Byrne seemed terrified of subtext, or the prospect of relying on audience interpretation, as everything the characters on the page were thinking or feeling was spelled out in panel length word balloons. It isn’t a perfect kind of storytelling, but at least it’s an effective one.

This is Avengers Vs. X-Men #5 of 12, think about that for a moment. Now, really consider what has happened so far in the pages of Marvel’s big summer storyline. The Phoenix Force is discovered to be heading towards earth, the Avengers go to Utopia to apprehend Hope, Hope runs, Wolverine finds her and goes to the moon, and the Phoenix Force arrives. Does that sound like five issues worth of plot to you?  To me it seems like territory that could have been covered in just two. It has all resulted in these books feeling more like a lead up to this big event than the start of it. Could Avengers Vs. X-Men #5 herald the start of a sharper and more unique second act to the series? Perhaps, but Marvel’s spotty history with event structure leaves me lacking in the faith department.

All hope is not lost because there are steps that the architects at the House of Ideas can implement to save this event in the eyes of the fans. They can leverage the shocking turn the story has taken to institute real change across the Marvel Universe, they can turn their focus away from global histrionics and focus down on intimate character moments and they can stop the interminable repeated conversations that have plagued the series’ first half. The odds of these coming to pass are slim, but if the creative talents at Marvel care about the long term opinion of their brand, they will be working hard to fix what is wrong. I will continue to hope, but I can’t shake the feeling that Avengers Vs. X-Men #5  is a small bright spot on an otherwise dull event.