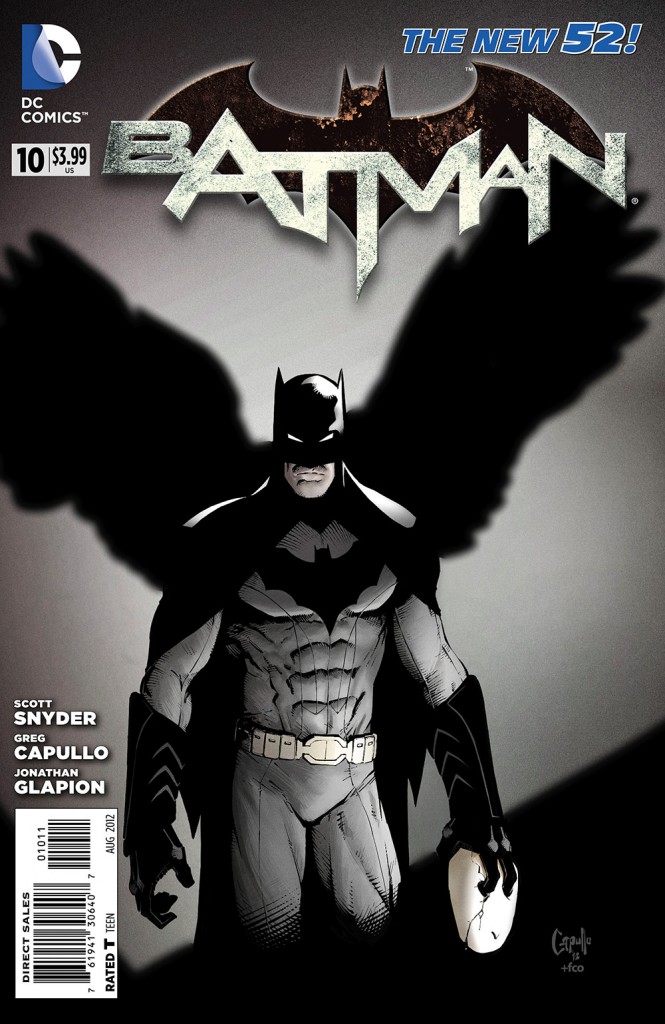 Change is a rare beast in any kind of episodic storytelling format. One only has to look at the structure of long running tv series to see that. Those shows can hit stagnation 4 or 5 years into their runs. So, from the outside it would be easy to assume that Batman, a character who has been around for 73+ years, could have easily fallen into a creative dead zone. Those outsiders would be wrong. Batman #10 is a book with a sense of surprise, a sense of weight and, if Scott Snyder follows through, it has introduced a development that could irrevocably alter The Dark Knight’s universe for years to come.

Snyder has spent the last few months tearing the caped crusader down to his very core. The Court of Owls has challenged Batman’s place in Gotham, pushed his sanity to the limit and even invades the sanctity of his own home. Our hero has continually pushed back against these new uber villains, but despite his best efforts they have done what all great antagonists do,rotting Bruce from the inside out. For another character this would spell certain doom, but this is Batman we are talking about. He is a character for whom personal upheaval and back breaking tragedy are no stranger and issue 10 is all about how he turns the tables of his feathered foes.

Writer Scott Snyder takes the hero he’s been chipping away at for months and finally gives him a little solid ground to stand on. It turns out you don’t want to humiliate the Bat and then let him recover, because in this issue he is brutal, cruel and brilliant in systematically tracking and taking down members of the elusive court. It’s amazing to see that Snyder, who is bravely tweaking Batman’s world in so many ways, is staying to true to what makes The Caped Crusader great. Which is that he is a man who will never give up, will never compromise and will never forget where he came from.

Seeing our hero kicking ass is wonderful, but this wouldn’t be Scott Snyder’s Batman without a proverbial wrench getting stuck in the gears. The writer promised a reveal of the mastermind behind the Night of the Owls and he delivers on that, but he does so much more than that. There is twist, one you never anticipated or could imagine, that made my jaw drop to the floor. It is yet to be seen if this is a clever red herring or a fundamental shift in Batman’s world, but either way it’s a master stroke of plot and character development.

I’ve gone on and on about Snyder, with good reason, but I would be remiss if I didn’t talk about the two amazingly talented artists that help bring this story to life. Greg Capullo has been pitch perfect from day one, straddling the line between bombast and subtlety in a near flawless manner, and it’s no different here. His Bruce is expressive, human and is as iconic to me as the man in the suit. His Batman is intimidating without being over the top and his panel layouts are clean but creative. I can’t imagine another artist working on this book as this has become the image I see when I think of The Dark Knight. Then of course we have Raphael Albuquerque, whose work highlights the horror of “The Fall Of The House of Wayne” exquisitely. The level of craftsmanship and artistry in the back up story is on par with its mother book and it’s a highlight of picking the issue up every month.

Buy it- From the first page to the last this is the ultimate in superhero storytelling. Scott Snyder is crafting a story that in every way lives up to the legacy of the greatest Batman stories. Greg Capullo’s art is fantastic as is the work of Raphael Albuquerque in the issue’s back up “Fall of the House of Wayne.” I would pay four dollars for that side story alone and that’s a testament to the cover to cover greatness of this title.