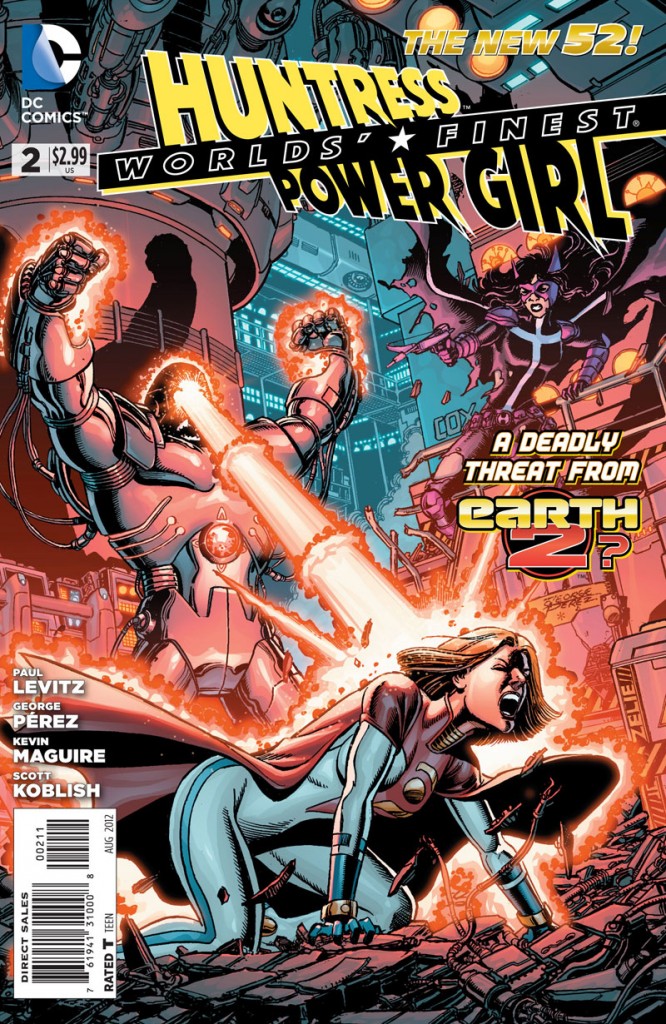 I’m sure that some of you loyal listeners/readers have wondered why I didn’t review Worlds’ Finest #1, considering my oft-stated passion for DC’s original “Earth-Two” concept. Well, that’s very nice of you, thank you for caring—but I was waiting for a more complete plot-line to emerge before commenting. To keep from being a spoil-sport, I’ll try to keep mentions of specifics to a minimum, as is my usual wont; and anyway, I find point-by-point recaps, tedious, don’t you?

Firstly, although both our lead characters appeared in Earth-2 #1, and the Huntress in her own recent mini-series, this is our proper introduction to these characters. On this “new” Earth-2, as on the “original”, the Huntress is Helena Wayne, the daughter of Batman, and Power Girl is Superman’s cousin, Kara of Krypton, albeit fighting evil as Supergirl.  During the battle to save the Earth depicted in Earth-2 #1, **(SPOILER ALERT)**

Helena and Kara are thrown through a dimensional gateway to parts unknown—at least until Worlds’ Finest #1!

This new Worlds’ Finest opens on a scene 5 years later on our Earth, with Kara (now calling herself Karen Starr) and Helena at dinner and a clever allusion to the varied histories of these characters. It’s a nicely-done piece of stage-setting that quickly shifts to an action sequence displaying the heroines’ abilities. Veteran scribe Paul Levitz’ strengths are much in evidence here, as this re-introductory exposition is seamless in it’s execution—brief, to the point—though nevertheless informative, with just enough held back to make your reading a journey of discovery.

Briefly, Kara is now the billionaire head of Starr Enterprises, in part due to Helena’s computer skills (a touch of Oracle, perhaps?), whose newest project is the “Quantum Tunneler”, which might be the girls’ ticket home to their world, but as issue #1 ends, the device is under attack—so needless to say, the ladies take exception!  The plot takes a deserved back-seat to the characterization, although I don’t mean to suggest that it’s either pointless or sub-standard—in fact, our antagonist seems to be tied directly to the 5- years-past events that led to Helena and Kara’s crossing over, and may be a key to their return trip.

Their back-story is told using a flashback structure that works brilliantly, and brings us to an understanding of the deep personal losses these women have endured, and their heroic resolve moving forward, either to a new life on Earth-1, or in Kara’s determination to get home. Kudos to Mr. Levitz—after many years as a DC executive, it’s grand to have him writing again.

The art is a two-fold delight. Both George Perez, penciller of the present-day sequences, and Kevin Maguire, who handles those chores on the flashbacks, are consummate professionals able to convincingly render the small-scale human moments that allow the women’s inner strength to shine through, as well as deliver stunning action scenes that neither fell forced nor shoe-horned in.

Worlds’ Finest seems as much a part of the “old” Earth-2 as the new, and my thanks to messers Levitz, Perez, and Maguire for this bit of old-school super-heroics. I’ll need to read more of the “home” Earth-2 before chiming in on that discussion, but so far, the side-bar Worlds’ Finest has quickly become one of the top books that DC is publishing at the moment, and with it’s outstanding female lead characters is a palpable antidote to the tarted-up, hyper-violent versions of some of DC’s iconic distaff stars that are parading through the company’s books.

VERDICT:  If you’ve been hesitant to pick this up due to the Earth-2 tie-in aspect, Worlds’ Finest functions quite well as a stand-alone title, exploring two great characters whose long history as friends is being revealed as we go. Give it a try—you won’t be disappointed!

CAVEAT: I’m not sure who to blame (though I assume it’s Jim Lee, who has been credited with most of the designs of “The New 52”), but Power Girl’s costume is dreadful. The chest emblem, which I guess is a “P” (but there could be a spot of a “G” in there, too!) is basically a bulls-eye over Power Girl’s…well, areola is the polite way of saying it, I guess–and I bet it’s the first use of that word in one of these reviews! Although her original outfit, created by noted artist Wally Wood, featured the much-talked about “cleavage area”, it seemed more in keeping with Kara’s “I don’t take any crap” attitude, while this new costume seems more like a wardrobe malfunction waiting to happen.

CHECK OUT:  ‘The Huntress” mini for an intro to Helena’s skills

ADDENDUM: To read about the original Power Girl & Huntress: