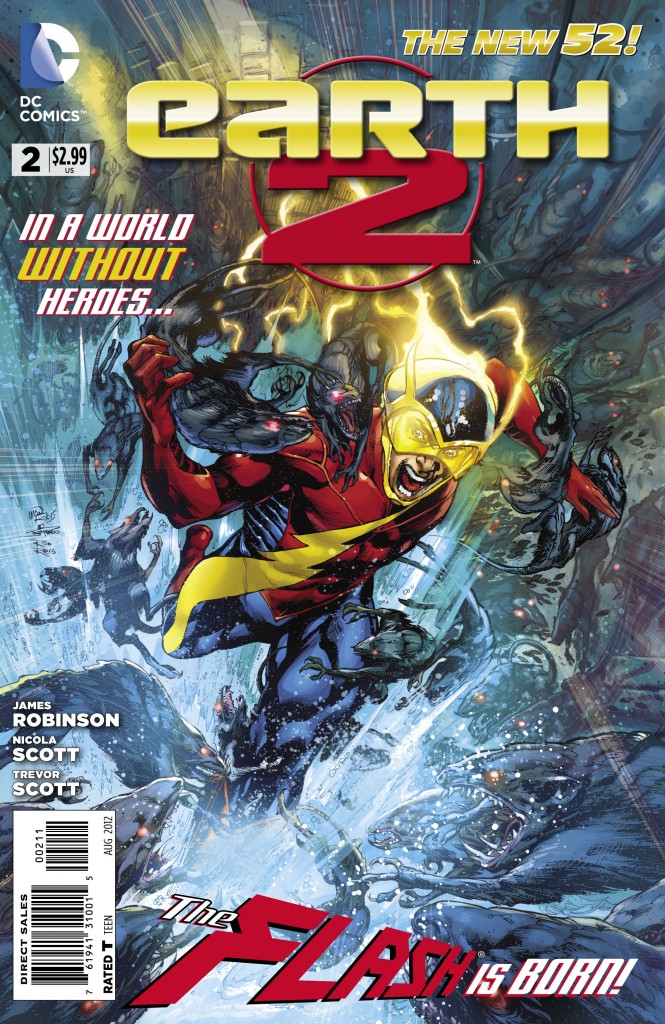 The Apokolips War has killed some of our greatest heroes. Superman, Wonder Woman, and Batman have all fallen after being struck down by the sinister Steppenwolf (I can’t help but think of the band every time I see his name in print. Stupidest villain name ever, maybe?) Anyway, the earth is in need of new heroes, and lucky for us, a few fresh faces have arrived on the scene to help take up the battle against those who would do us harm.

I feel two ways about this issue. Firstly, I seriously enjoyed the moments shared between Jay Garrick and the now dying God, Mercury. This scene feels the way a passing of powers moment should. The powerful words spoken by Mercury coupled with the trepidation and doubt of Garrick’s own reluctance to accept that he is much more than he seems, for me, is the perfect way to birth a new hero on Earth 2. Not only do we get to see Garrick become much more than he’d ever imagined himself to be, but we now have a likable and relatable hero to add to our new roster.

On the other end of the spectrum one cannot review Earth 2 #2 without bringing to the spotlight the sudden, blossoming homosexual relationship between Alan Scott and Samuel. Now, not that I feel the need to defend myself but I will say this … I am all for homosexuality in comics. It’s a part of our culture that far too many people are not only ignorant about but perhaps this union between these two characters can teach readers a thing or two about love between human beings. I think it’s important to us as the dominant race on this earth (or Earth 2, hey-o!) to be tolerant and encouraging of both hetero and homosexual relationships.

Stepping off of my gay soapbox for a minute (and no, I am not of the homosexual persuasion), I do feel that the introduction to this somewhat radical (and rather copycat) move by DC is a bit rushed. Alan steps off the plane, sees Samuel, and BOOM, tongue action galore. Now while it’s just a loving embrace between two men I felt as if the rest of the content pertaining to these two characters focused on nothing but their homosexuality. With words like “magical” and “breathtaking” I can’t help but feel as if these first moments could be a misstep in what’s something that should be handled with care, as this angle of Earth 2 will surely have an impact on the books readership.

I just feel that perhaps it should come off as a bit more … I don’t know … casual? I really just don’t want to see these two characters get pigeonholed or possibly become an entity that turns readers off to an otherwise awesome book. It should be very interesting to see how DC handles both Alan and Samuel in the coming issues of Earth 2.

So I feel as if I’ve taken up enough of your time and have pushed my pro-homosexuality in comics agenda on you enough for now. I am not gay, but do have several friends of that orientation and they are some of the greatest people I’ve met, therefore I support them and their making more of a splash on the comic book page of such a high profile book.

Oh, and before I forget, the moments with the new Flash … AWESOME!

Buy it. This series is shaping up to be something pretty special and in my opinion is one of the best within the DC New 52. Could they finally be getting some things right?