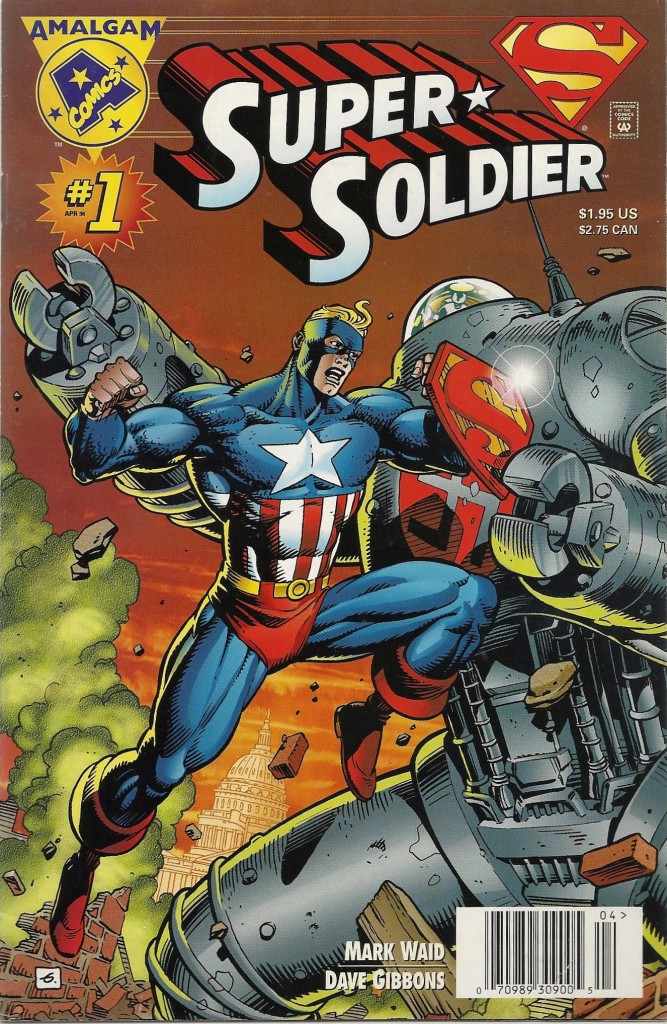 Near the top of my list of favorite comic book publishers is Amalgam Comics. “If that’s so Uncle Bob, you old curmudgeon, why haven’t you ever mentioned it before” I can hear you asking (and please keep your voice down, I have a hangover). Well, boys and girls, here’s what happened; while going through the Great Pyramid of boxes that forms part of my “Library” in order to pull research material for Peter David’s appearance on “Talking Comics” (..and thanks again to Peter!), I came across the oeuvre of the Amalgam Comics Group, in both the original issues and the trade paperback collections (yes, I know it’s pathetic, you don’t have to remind me). So, with AvX unfortunately still rattling around in my head, I sought to clear my mind with some fun reading.

“How does this all connect up” you’re asking now (y’know, I’m starting to grow weary of the interrogation– but thanks for the question, nonetheless); well, in 1995 there began a great 4-issue mini-series titled DC vs. Marvel, with story by Peter David and Ron Marz, art by Dan Jurgens and Claudio Castellini, with the whole megillah overseen by Mike Carlin (DC) and Mark Gruenwald (Marvel). The plot—two “brothers”, each the physical embodiment of their respective universes, engage in a jealousy-fueled battle that results in a “Big Bang”, and the creation of both the DC and Marvel universes, although it leaves the two brothers, and the two universes, ignorant of each other—but that is changing! To avoid another conflict-driven cataclysm, the brothers set heroes from each reality into combat to determine which universe will survive. Unbeknownst to them, the Spectre and the Living Tribunal, in an effort to preserve both realties, combine the two universes into one “Amalgam Universe” (hold on, I need to catch my breath for a second).

Legends of the Dark Claw

As you can see by some of the titles, the blended universe (all of a sudden I’m craving a daiquiri, funny that — sorry, moving on) was presented in a conjoined slate of books which featured interesting surprises as to what bits of each character’s history made the cut, and wonderfully involved and self-aware stories by talents such as Mark Waid, Karl & Barbara Kessel, Gerard Jones, and Chuck Dixon, and fabulous art by Gary Frank, Mike Wieringo, Jim Balent, Howard Porter,  Jose Garcia-Lopez, Dave Gibbons and John Byrne.

Challengers of the Fantastic

Thorion of the New Gods

Sadly, the thaw in the “Comics Cold War” has frozen back over, so the trade editions of DC vs. Marvel and the various Amalgam collections are all out-of-print, and all quite pricey—you didn’t expect the Old Taskmaster to make this easy, did you? The good thing, however, is that the individual issues often pop up in the “Cheapo” boxes at larger comic stores, and I’ve seen them sell for as low as 25 cents at conventions. (“Do you mean to say that I can’t buy them on the internet, Uncle Bob, you old creep?”—I’m sure that you can, little Audrey, but it’s so much more fun to rummage through the remains; serendipity might bring you even more treasures—and by the way, see the movie “Serendipity”—it’s quite good.)

VERDICT: If you’ve never encountered these quirky, fun books before, they are all great reads, filled with many surprises, and well worth the effort to seek out.

Return to the Amalgam Age: Marvel

Return to the Amalgam Age: DC

ADDENDUM: There was a very cool trading card set, that served as a sort-of “Who’s Who?”/”OHOTMU” for the Amalgam Universe.

TRIVIA:  According to people who make a living thinking about such things, the Amalgam universe is Marvel Earth #9602!!