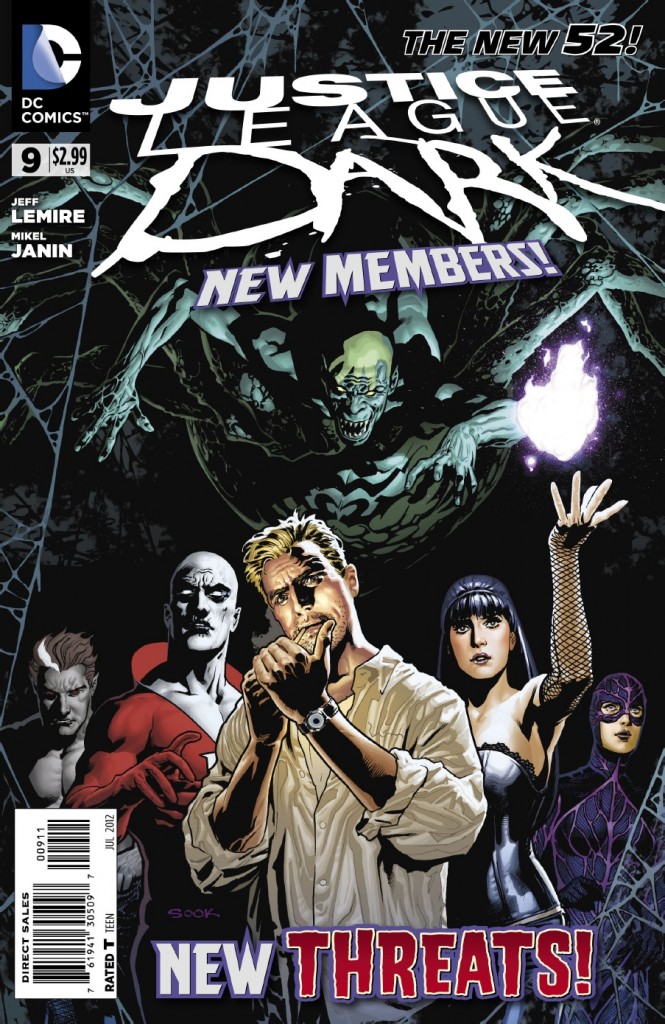 Justice League Dark #9  hit stands this week with an incredible amount of expectations. Jeff Lemire, who pens Sweet Tooth, Animal Man and Frankenstein: Agent of S.H.AD.E., is one of the best writers working in comics right now, and the prospect of him taking over this mystical group of character was thrilling to me. I felt the first few arcs of JLD had a lot of promise, but suffered from a lack of narrative focus that marred even it’s best story lines. I felt so mixed about the title that I had moved it off my pull list, until now. Justice League Dark #9 marks a new start for the series and functions very much as a reintroduction to the cast of characters established in the first eight issues. It’s a strong, workman like effort that does an admirable job beginning it’s arc, but it lacks the crisp plotting and dynamic character work that makes Mr. Lemire’s other writing so fantastic.

Although this is a great place to jump onto the series it’s not a number one, so there is past business to wrap up and Lemire does his best to burn through as many of the convoluted plot threads and obscure character relationships that he can. That amount of change requires a lot of exposition and at times the book bends under the weight of all the information it’s conveying. This also makes the plot, which is a very standard bad guy’s got a new toy story, feel like it’s a bit of an afterthought. This seems out of character for Mr. Lemire, but I have so much faith in his talent that I can only assume this is being done to free up other issues from the same burden.

While I’m not worried about the over use of exposition what does worry me is the way John Constantine is written. His attitude is right, the actions he is taking seem in the vein of the character, but for some reason the voice Lemire is using for him seems forced. The Hellblazer’s dialogue relied so heavily on “britishisms” that it came close to parody. I never felt like I was being talked to by a real person and this is from a writer who makes Frankenstein seem relatable. It can take time for a writer to settle into a character, and maybe that’s all this is, but for now it has me concerned.

What is great about JLD is the supporting cast that fills out this unlikely band of heroes. I couldn’t be more excited that Zatanna will be figuring prominently in the coming story and her unique position as the only true “superhero” on the team should make for some meaty interpersonal drama. You put her together with Deadman, a Vampire hopped up on Magic and a mysterious shape shifting government operative known as Black Orchid and you have a team that can provide, not only narrative flourishes, but artistic ones.

Once the group enters the final battle of the issue we get to see much of that  promise fulfilled, but even more importantly, for the first time, Justice League Dark has a real sense of purpose. It doesn’t crystalize until the last few panels, and I’m not personally sure of what it all means, but I know this the group has a clear goal and I want to be there to see them acheive it. This fact alone sets Lemire’s run up to be more effective than Peter Milligan’s previous take and should be reason enough to stick around a bit longer.

This may be a fresh start story-wise, but in the art department the book remains on course. And why shouldn’t it? Mikel Janin has had a stellar run on the book so far and he does not disappoint here. He has a firm handle on how to bring the mystical and absurd powers of these “heroes” to life in a way that manages to ground them without taking away any of their scope.

Buy It – Justice League Dark #9 is a book that feels weighted down by the amount of information it’s trying to convey in a short amount of time. Looking past it’s initial woes it’s clear that JLD can be something quite unique. It’s got a great cast of characters, an interesting premise and, while the plot itself is nothing new, it’s story delivery method is quite clever. Jeff Lemire just needs to settle in to the rhythm of his main character and things should clear up in no time.  If this was another writer I’d be less apt to recommend it, but I can’t imagine Mr. Lemire steering us wrong.