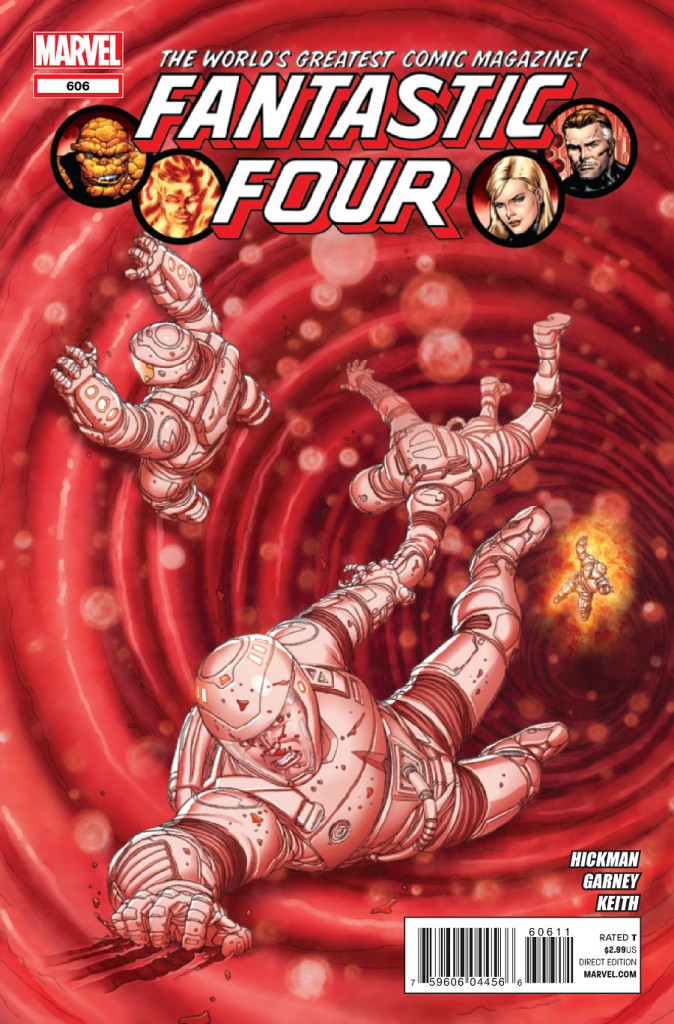 Ever since our resident Fantastic Four guru, Bob Reyer, joined the cast of Talking Comics he brought with him an overwhelming enthusiasm for everything FF, and for mighty good reason. Since joining the fray at issue #600 of what’s surely and arguably the most complex of the Cosmic style comic books on the market I’ve been entranced by the exploits of Reed Richards and his friends. The Fantastic Four is now one of my most anticipated titles each month and the latest issue only makes me crave another as soon as time will allow.

Stepping off from the previous 605.1 issue (released just one week ago) we’re now ready to move forward and begin a whole adventure with Richards, Sue, Johnny, and Ben. This latest issue has (in my newly established estimation) everything you could want in a Fantastic Four comic. Our heroes are off, deep inside the cosmos, in search of a not so easy to obtain alien element for reasons unknown and things are going to get dangerous.

Rather than reveal the plot, because really it’s the final pages of the issue that tie everything together and really enforce why this is such a great Marvel property, we’ll just focus on the themes. Not only are we treated to the ever present resiliency of the group but also their ability to work together as a team to get the mission done and done well. The issue places us inside of deep, dark space (something not entirely out of the norm for the Fantastic Four) but it’s the purpose of their mission that really sells this particular outing.

It’s very rare that I’ll read a comic that I can honestly say warmed my heart but that’s exactly what this issue had done. The lengths this group of heroes will go to in order to complete their mission is nothing short of fictionally inspiring and more super teams should strive to be as heroic as the members of this group. With no major villain in place for this issue the threat comes from something very real that any human reader can most certainly relate to once the purpose of their journey is revealed.

Once again, as someone who hasn’t been reading Fantastic Four for too long (maybe a few months) and is actually working his way back in their timeline (there’s a lot of it), I’m comforted to know that I can jump in and follow this groups exploits into deep space with almost no problems at all. I recommend that anyone who isn’t reading this amazing series from month to month go and seek out issues #600 to the current #606 so you can join in on what’s undoubtedly one of the best books on the shelf.

Buy it. Go ahead and grab yourself issue #605.1 to give yourself something to latch onto but then be sure to pick up this latest issue. I think you’ll be pleasantly surprised and might even find yourself feeling a little sniffly toward the end of the issue. I know I did.