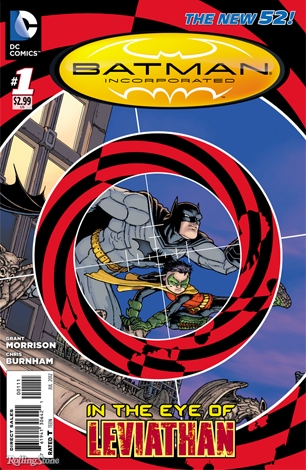 I’m going to put this out on front street, Batman Incorporated #1 is a horrible “first issue” of a comic book. I’m not saying it’s a bad book, because in fact it has several fantastic moments, but as an inaugural outing it does more to confuse than to welcome in new readers. Perhaps constant readers of the franchise will decry this review because they are perfectly happy to not have to sit through an expositional recount of events they have all ready consumed, but to them I say, “I think you are missing the point.”

You see this is the DC New 52 and like it or not it’s meant to relaunch heroes in a more streamlined continuity. There should be no “Vol.2’s” in play here, no inscrutable continuity, and a #1 should certainly not be the conclusion to a previous story thread. I don’t think writer Grant Morrison had the responsibility of rehashing all the past events of his Batman tale, but he certainly could have done better than dropping his readers into an action scene that, while it may be on tone with past issues, is so completely bizarre it leaves the audience without any traction at all. Make no mistake Batman Incorporated #1 gives newbies no quarter when it comes to its content, and the book is largely a failure because of it.

The things that are good about Morrison’s latest endeavor are the kind of story set ups that show enough promise to rise above the confusing din of the rest of the issue. There is a side story in the book that, while slightly tweaked, is a great way to humanize the other side of the Caped Crusaders eternal war on crime. Batman Inc. also does a solid job of delivering complex emotional scenes between the boy wonder, Damain Wayne, and his father.  My only problem with them, and this is more a general comic book issue than a tiff with Morrison’s writing, is that I’ve spent nine issues growing to like Damian in Peter Tomasi’s Batman and Robin only to have him revert back into brat mode here. I understand that each writer takes on the characters in their own way, but as this book mentions some of the events in that other title, I was hoping for a more streamlined character portrait. That qualm aside I like the direction that Morrison is taking the story and the cliffhanger, while obviously a red herring, points to some interesting events in the future.

Sigh, I couldn’t even tell you since this book is finishing off a story line from Morrison’s past Batman Inc. run, as well as the Leviathan Strikes! one shot that came out last year. Also if you are a first time reader the only scene that features “Batman Inc.” is going to leave you more than a little miffed.

Wait and See -I wish that Batman Incorporated #1 was more first issue and less a continuation of a month’s old story line. The DC New 52 is supposed to be about welcoming people in and this does nothing of the sort. And that’s a shame because there are some diamonds in the rough of Batman Incoporated #1, I just don’t know if many non fans will be willing to find them.  Add to that inconsistent art, I especially dislike the pugish look of Damian’s face, and this is a package you should probably leave on the shelf until we see what’s coming next month.