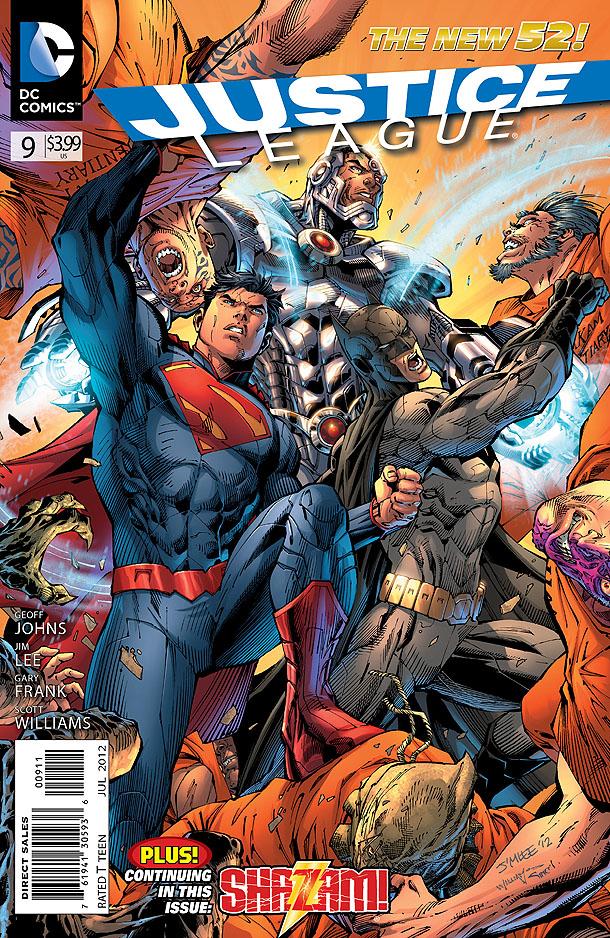 No one has been harder on Justice League than I have since it relaunched the DC Universe about nine months ago. Perhaps, it’s because of the love I had for Geoff Johns as a writer or maybe I just had a wildly high set of expectations because of the weight the JL name carries.  Whatever the reason, the book has left me cold month after month and after last month’s occasionally fun, but useless feeling Green Arrow crossover, I had decided to give it up. When comic day rolled around this week I tried to remain staunch in my decision, but alas I broke down as I saw a new arc was beginning. So, I said to myself “Let’s give it one more shot, and if this one sucks we exile it for good!”

Now, as I sit here writing this review I am thankful for geek compulsion as Justice League #9  marks the first time in Geoff Johns’ New 52 run that I can say that DC Comics’ flagship title is unequivocally great. The problems that marred the first eight issues, flimsy character portraits and meaningless action beats,  have been replaced here by an emphasis on developing our heroes as sympathetic people and the creation of an intriguing new villain. This is a book worthy of the name Justice League and, finally, a title worthy of the creative talent it employs.

The most effective device Justice League #9 employs is the use of the flashback. You may say to yourself, “Bobby wasn’t the entire first arc technically a flashback,” and I would say, yes well spoken reader, but these flashbacks set themselves apart in a very crucial way. They matter. These are not call backs to giant battles or to even monumental standoffs in our heroes’ lives, instead Johns chooses to show us the more human side of these “Gods among men.” We get to see a young Bruce Wayne coping with his parent’s death in a subtle way, a young Clark Kent being an outcast and a highly effective look at what has the present day Steve Trevor in so much pain. These insights never last more than a few panels, but they give a weight to the book that has been sorely lacking in this comic’s past issues. Mr. Johns also finally feels like he is in a groove with his dialogue, as we get a crackling Flash/Green Lantern scene and some time with Batman where he actually feels like Batman.

Justice League #9  is not only rich in character, but it’s also an absorbing start to a mystery story. We know who the villain is and what he wants to accomplish, but we don’t know how he plans on achieving it. This kind of narrative always gets me into a guessing mood, and I always love a book that gets my critical thinking skills pumping. The engagement in the “how” of it all is amplified because the new villain Geoff Johns introduces is fascinating. He is a classic, “These heroes were once my heroes, but somehow they betrayed my trust and now I hate them!” foe, and that kind of internal dichotomy always makes for a good read. I’m endlessly more excited for this cerebral and diabolical villain than I was for the powerful, but somewhat boring, Darkseid. So, congratulation Geoff Johns and Jim Lee I am for the first time completely excited about the prospect of the next Justice League book.

Buy It – If you stopped reading Justice League you were more than justified in doing so, but if you have any love for the super team this is a perfect place to jump back on. Geoff Johns has finally found his rhythm and voice for these characters and it shows. The art by Jim Lee is, as always, bombastic, but here we also get some great intimate panels that show a diversity that has been lacking so far. The narrative also has one tantalizing call back to the events of Flashpoint, and even the back up story featuring Billy Batson feels like it’s getting on track. Justice League #9  is a kick ass book and one that hopefully marks the beginning of this comic living up to the moniker of “flagship title.”