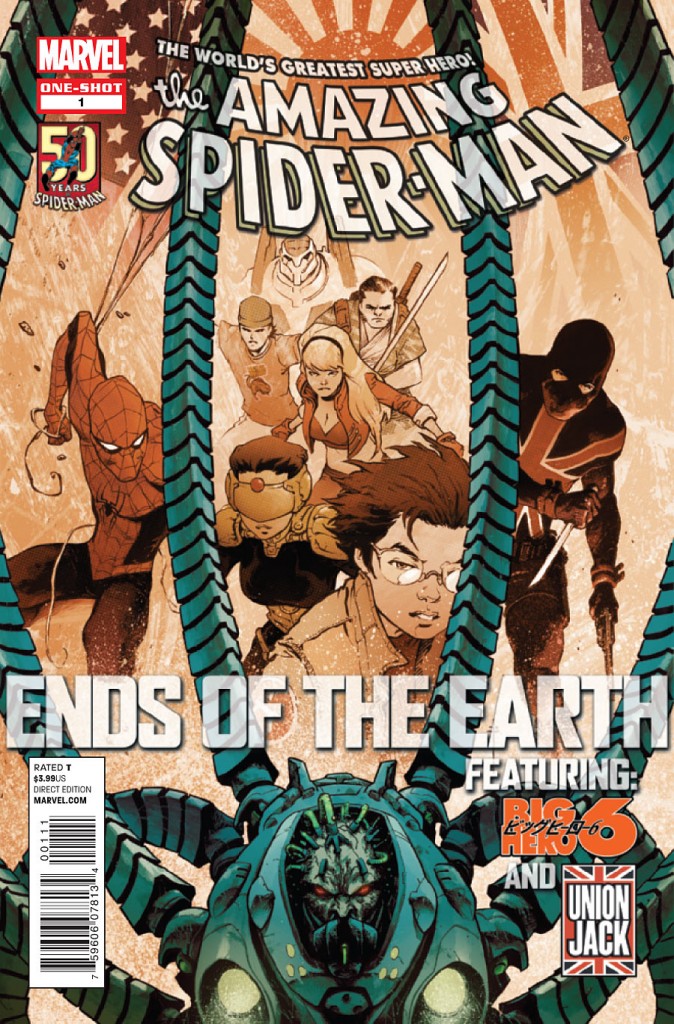 The Amazing Spider-Man: Ends of the Earth One #1

I was hesitant to even pick up The Amazing Spider-Man: Ends of the Earth #1.  It featured characters I didn’t care very much to read about, it wasn’t written by Spider-Man architect Dan Slott and, perhaps unfairly, it played upon the event fatigue I’ve been feeling in the wake of Night of the Owls and Avengers Vs. X-Men.  As always my love of Spidey won out over my grumpiness and I added it to my pile, and am I ever glad I did.  The Amazing Spider-Man: Ends of the Earth #1 is a briskly told, engaging and entertaining story, whose little used characters provide a breath of fresh air in the midst of an all ready stellar event.

First off, you should know that if you haven’t been reading the Ends of the Earth tale happening in Amazing Spider-Man you should not be picking up this book. It may say “number one” on the cover, but this is a side story of that event and you will be wholly confused if you pick it up solo. The plot itself deals with a group of smaller scale heroes who answer the call when public enemy #1 Spider-Man needs some assistance. How smaller scale you might ask? Well, let me throw a few names at you; Kangaroo, Sabra, Big Hero Six, Titanium Man and Union Jack, not exactly the Avengers, but it’s that lack of familiarity that really excited me about this issue.  All of these characters get some good business, but it’s really Union Jack and the Big Hero Six that are the stars of the show.

Union Jack, a british soldier with mystical powers, is written by Rob Williams with the easy charm of the best British gangster films. Think Jason Statham, not in his current action hero mode, but in his awesome Snatch and Lock Stock and Two Smoking Barrels days. In just a few pages Williams conveys the character’s history, his world weariness and his devotion to Queen and country. It’s expert storytelling and it leaves me wanting more of the character where ever and whenever I can get him. The second part of Ends of the Earth #1, written by Brian Clevinger, deals exclusively with the Big Hero 6 and after spending just half an issue with them I don’t understand why they aren’t more prevalent in the Marvel Universe. They are a difficult team to describe, but I’d say they are what would happen if Teen Titans and Pokemon did the nasty.  Their powers are cool, their action scene quite dynamic and, most importantly they are a crazy collection of wholly Japanese influenced heroes who fit like a glove into Spidey’s universe.

Buy It – If you are reading Ends of the Earth and were hesitant to branch out to this off shoot title don’t be. It may not be written by Dan Slott, but it features the same wit and fun we’ve become accustomed to in his Amazing Spider-Man run. You may not know these heroes, but the writing is so sharp that you will warm to them quite quickly. The Amazing Spider-Man: Ends of the Earth #1 also puts tremendous emphasis on these characters’ sense of responsibility to their native countries, which is an element often lost in the NYC heavy Marvel U.  This is a worthy addition to the series and fun read while we wait for more of the Wall Crawler’s antics.