FacebookTwitterPinterest
Who’s that guy in the mid-credit sequence in The Avengers movie”? I’ll try to provide a brief overview to bring you up-to-speed on a character that could rightfully be called Marvel’s great nihilist, and promises to be a more-than-worthy adversary for “Earth’s Mightiest Heroes” in The Avengers II. 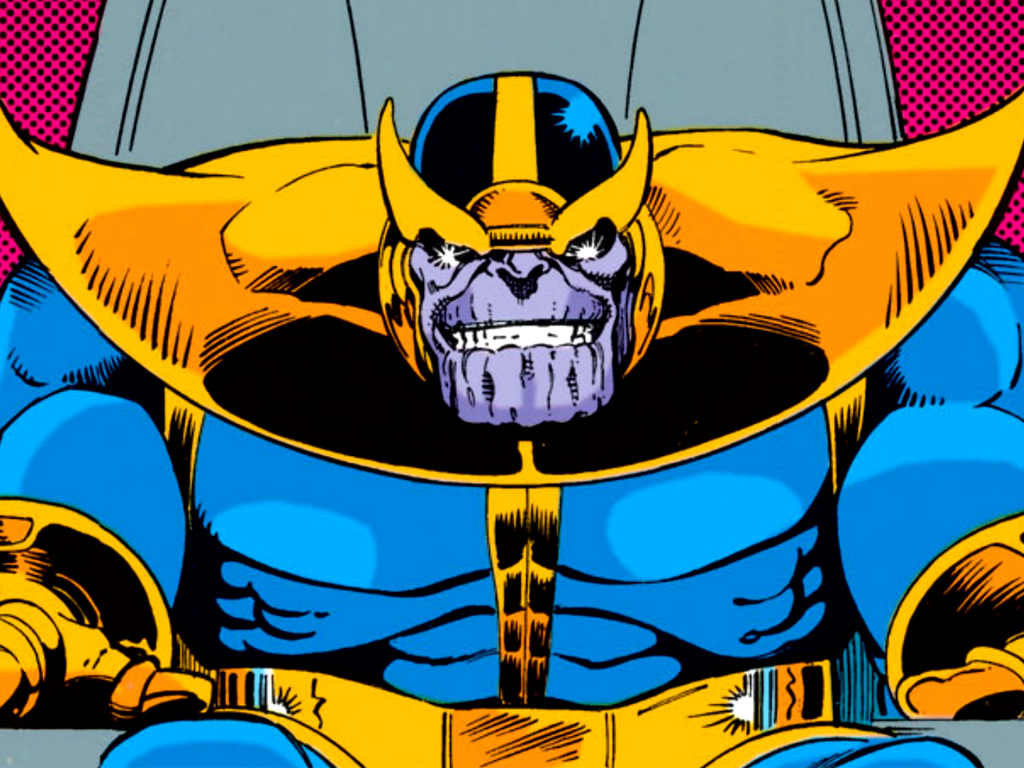 A question that I’ve found myself answering repeatedly over the last week or so has been, of course, “Why don’t you do something about your gray hair?”, which has very little or nothing to do with the larger question of “Who’s that guy in the mid-credit sequence in The Avengers movie”? I’ll try to provide a brief overview to bring you up-to-speed on a character that could rightfully be called Marvel’s great nihilist, and promises to be a more-than-worthy adversary for “Earth’s Mightiest Heroes” in The Avengers II.

Technically, Thanos (as well as Drax, the Destroyer) didn’t start out as a Marvel Comics villain, but was created independently by Jim Starlin while in college. Soon after beginning as a page finisher at Marvel in 1972, Mr. Starlin was asked by then Editor-in-Chief Roy Thomas if he’d “like to do an issue of Iron Man?” Not one to pass up such a golden opportunity, and with a ready-made antagonist at hand, Mr. Starlin shoe-horned Thanos–with Drax on his tail– into his debut as writer/artist on Invincible Iron Man #55. Given the lead time required to produce comics, the preliminary pages must have been enough for “Rascally Roy” (as Stan Lee used to call him) to hand over the reins of Captain Marvel to Mr. Starlin, beginning with issue #25. Thanos’ initial story arc would wind through the pages of Captain Marvel #25-33, Daredevil #107 and Avengers #125, a run covering 18 months of must-see comic books.

As laid out by Mr. Starlin, Thanos was born on the Saturnian moon of Titan to its leader Mentor and his wife, Sui-san. A mutant, resembling the “Deviant” race, he becomes a loner and recluse, embracing nihilism and death, eventually becoming the paramour of its living embodiment, Mistress Death.

In an attempt to impress her, he destroys much of Titan, and heads to Earth, hoping to possess the Cosmic Cube. His arrival is witnessed by a family driving to vacation, and though he attempts to eradicate them to keep his presence hidden, the father is transformed by Lord Chronos into Drax, while the daughter is brought to Titan by Mentor, and eventually re-emerges as Moondragon. Considering the grief both Drax and Moondragon would visit upon him, perhaps Thanos would have been better served by up-grading their rental car than attempting their destruction, but I digress.

Failing to retain the Cosmic Cube would lead Thanos into lusting after the Soul Gem of Adam Warlock, who first saw the light of day as the genetic super-man “Him” in the Lee/Kirby Fantastic Four #66-67, but had recently been featured by Roy Thomas and artist Gil Kane as the defender of Counter-Earth, a planet orbiting on the opposite side of our Sun. Mr. Starlin upped the cosmic ante on the character, bringing him full-fledged into the conflict via issues of Strange Tales (#178-181), Warlock (#9-11), Marvel Team-up (#55), and the 1977 Annuals for The Avengers  & Marvel Two-in-One.  Thanos would meet failure one again, however, and this time his fate would be transformation into a statue of living stone.

Thanos would find a way to return for his epic struggle to possess the six Infinity Gems (Soul, Power, Time, Space, Mind, Reality), each of which grants the holder power over one aspect of the universe, and when mounted together form “The Infinity Gauntlet”. This Starlin-penned saga would require four mini-series (Thanos Quest, The Infinity Gauntlet, The Infinity War & The Infinity Crusade –plus some add-ons) to complete, spanning the years 1990 to 1993, and featuring art by Ron Lim and George Perez. Any attempt by me to condense the story-line into an easily-digestible morsel is beyond my abilities and the scope of this essay; just read the thing—it’s all been collected in trade editions, and well worth the time.

Thanos is too grand a character to leave dormant, so a raft of writers have set him against the combined forces of Earth’s heroes over the last 20 years, but for me, at least, nothing has ever matched the majesty of those tales told by his creator, Jim Starlin, and his able collaborators.

“In my first Thanos drawings, if he looked like anybody, it was Metron. Roy took one look at the guy in the Metron-like chair and said: ‘Beef him up–if you’re going to steal one of the New Gods, at least rip-off Darkseid, the really good one!’”