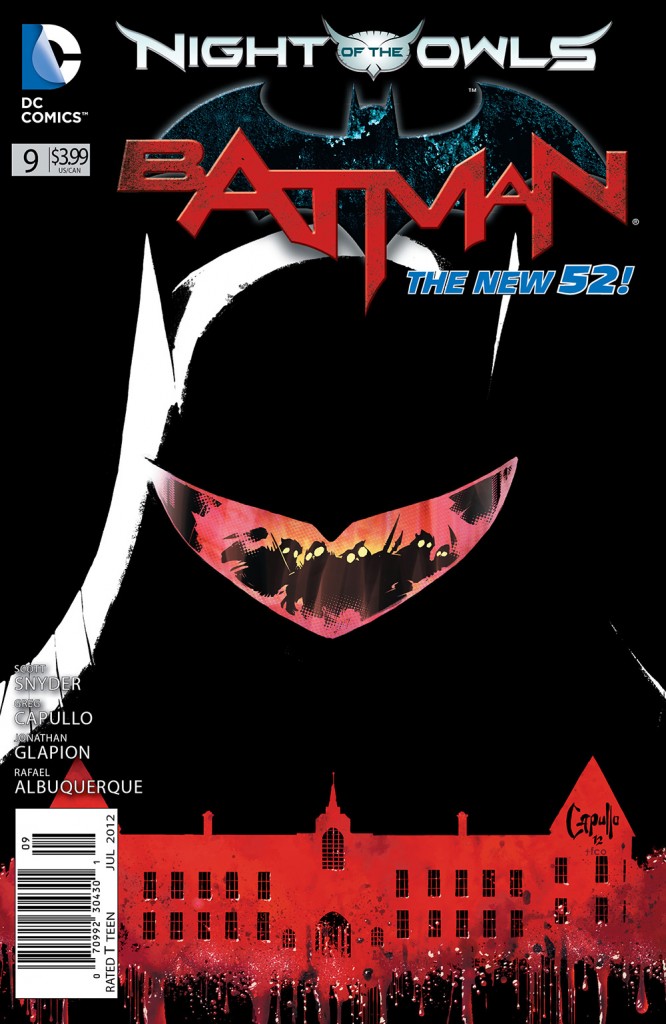 Review by Bobby Shortle
In Scott Snyder and Greg Capullo’s the New 52 run of Batman there have been two perfect issues. The first was the mind bending issue #5 and the second was last month’s Night of the Owls prelude, Batman #8.  The trouble with achieving these heights is that you need to follow them up and while #6, and now #9, can’t be called disappointments, they don’t feature the same literary thrill as their predecessors. Don’t mistake this as me saying Batman #9 is anything short of stellar, because it’s still the best book I read this week.
If the narrative has any shortcoming it’s that it needs to pay off the invasion of Wayne Manor and ipso facto, get Bruce out the cave and onto the streets of Gotham. There is nothing inherently wrong with these scenes, they are just very traditional, and I’ve become spoiled by this book’s constant ability to bring unique and surprising twists to a classic character.  But, as is his m.o. Scott Snyder writes these sequences with a cleverness that puts it a cut above your standard action scenes. He is obviously having fun playing with the bat gadgets (Batmobile yay!) and he even sculpts a few sure to be classic one liners that I wont ruin here.
Batman #9 is an excellent book, but it’s the backup story entitled “Fall of the House of Wayne Part 1” that is something truly special.  Like the rest of the “Night of the Owls” event the narrative here delves into a figure of Gotham’s past, but this time, instead of a councilman or higher up, we are thrust into the story of Jarvis Pennyworth. I’ve never read a story that deals directly with our beloved Alfred’s father and thusly it’s fascinating to get a peek into the lives of the Wayne’s when Bruce is just an infant. Snyder and Tynion shape this tale of yesterday into a gothic horror story that uses Lovecraftian narration to instill a sense of dread in the reader and Raphael Albuquerque’s beautiful art only serves to enhance the suspense.
VERDICT
Buy It – Batman #9 is playing with interesting ideas about legacy, the value of altruism and the unfairness which permeates the world. Of course that is in between all the ass kickery that Batman employs during this issue. Writer Scott Snyder has spent two issues paying off the Owls invasion of Wayne Manor, but now it’s time for Bruce to go back on the offensive the best way he knows how. You see, Night of the Owls is at its heart a mystery story and I can’t  wait to see the World’s Greatest Detective tackle it head on.