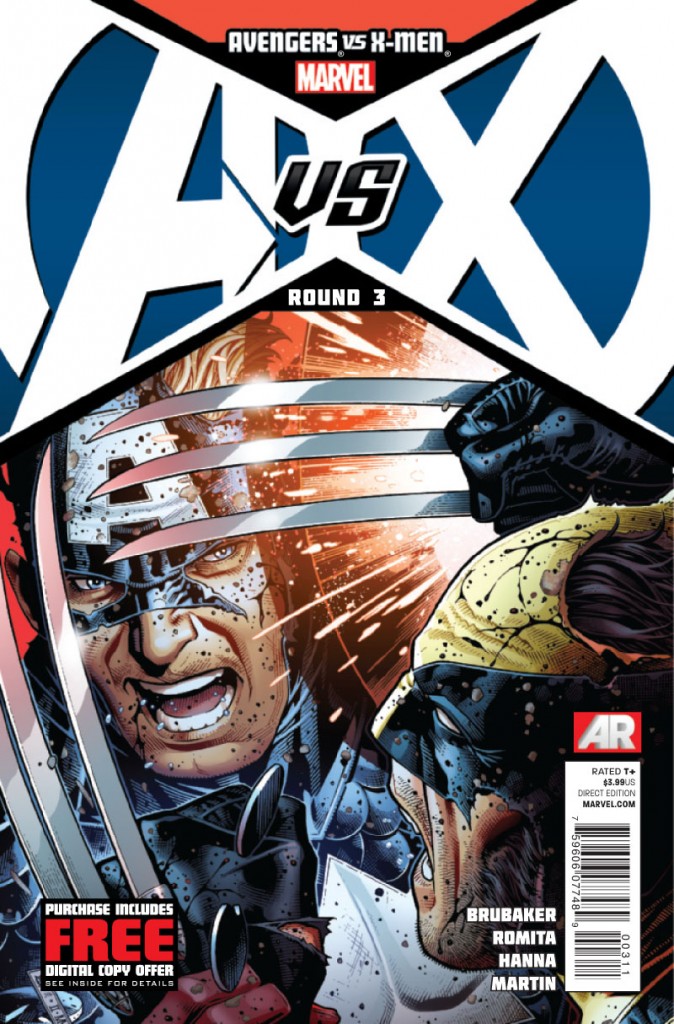 Round 1 saw a quality if uninspired start, Round 2 brought an epic verbosity to the proceedings and now Avengers Vs. X-Men Round 3 is here to continue the tale of the fracas between Marvel’s two biggest teams. Does Ed Brubaker’s entry improve on the the great work of Jason Aaron or does it settle back down into the run of the mill that Bendis put forth in issue one? The answer is, somewhere in between, as Brubaker creates some interesting situations, but that can’t help AVX #3 from feeling like a stop gap book.

The main draw of AVX #3 is the battle between Captain America and Wolverine that the issue’s cover promises to give us. The iconic heroes don’t duke it out until the end of the story and, while the fight is fun, it doesn’t feel very necessary. In fact, it just seems like the writers couldn’t pass up the chance to pit these two guys against one another, but never do you get the feeling the violence bing done is intrinsic to the proceedings. What I do like is that the creators of AVX are now positioning Wolverine as a third side to this battle and personally his side is the only one I really care about. That may change, but this is shaping up to be an epic Wolverine story and I’m psyched for that part of it.

VERDICT
Avengers Vs. X-Men #3 is nothing really special and it seems to be a in a bit of a holding pattern story wise. I found myself enjoying the Wolverine sections, being off put by Captain America’s attitude and still lost on just what the deal is with young Hope. I’m concerned about the way this story is moving, but not to where it is moving,so at this time I remain cautiously optimistic.