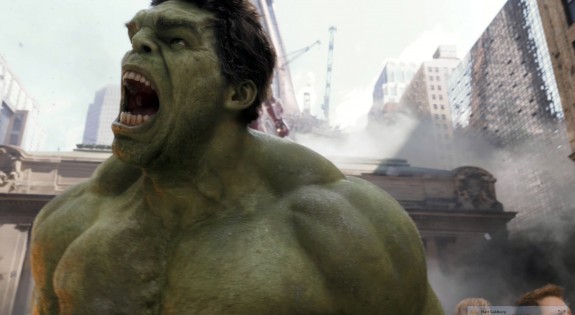 Explosions paint the sky like fireworks, the huddled masses on New York cower in fear  and the myths and legends of our time do battle in a dazzling cavalcade of colors and lights. This is The Avengers, a funny, exciting, spectacular masterpiece of popcorn entertainment that ups the ante on, not just the Marvel Movie Universe and the superhero film, but on the summer event film in general. It brings it in every sense of the word and does what so few films do; it delivers on and exceeds expectations.

You may think I’m being hyperbolic, and you would be right. But, you see that’s what The Avengers is, the film is a hyperbole on celluloid in the purest sense of the word. Joss Whedon and Marvel have done the unthinkable and taken four larger than life characters, from vastly different genres of movie, and stitched them together in a way that’s not only effective, but organic. Marvel had a plan, they took their time and they executed on it with laser like precision. This movie couldn’t have existed ten years ago in a world where studios were afraid of the more bizarre elements of the comic book world, but in a post Avengers universe the game has changed.

You know in big event films how there is always that moment, scene or sequence that everyone is talking about the next day? Things like the Dubai sequence in Mission Impossible: Ghost Protocol,  the space dive in J.J. Abrams Star Trek, or even the highway chase in The Dark Knight? Well, The Avengers has 20 of them. The skirmishes between our heroes are as big as nearly anything in past Marvel films and the 40 minute conclusion is about as well choreographed and fluid as city wide battle can be. You might hear detractors of the film, but I dare anyone to say they have gotten shortchanged. Every hero gets to do about 5 things that are several degrees cooler than they got to do in their individual films. The film sets forth it’s premise and leave everything on the table.

Joss Whedon has been a geek hero for years, but he was always known as a TV guy. With this movie he has catapulted himself into the stratosphere of megabudget filmmakers and I don’t want to see anyone else touching this franchise until he’s ready to leave it. I’m a bit of a Whedon acolyte, but even I was slightly worried that he would write these heroes a little too “Whedony.”  That fear was unfounded, as it’s clear Joss has too much respect and love for the history of these characters to squish them into that narrow a box. Any of you fearing that this would be Iron Man by way of Buffy the Vampire Slayer you can rest easy.

What Whedon does bring to the table is his penchant for razor sharp character interaction. The dialogue scenes between our heroes and villain crackle with as much energy as any of the battle scenes and it’s especially delicious to watch them all play off Tom Hiddleston’s Loki. The concerns about the movie looking cheap, uncinematic or “like a TV show” were completely ridiculous to begin with, but seem ludicrous after actually seeing the movie. Whedon is not the same visual filmmaker as Christopher Nolan or J.J. Abrams, but The Avengers looks fantastic end of story.

Which brings me to the performances. The aforementioned Hiddleston brings it and brings it hard as the Norse God of Mischief. He was a revelation last year in Thor and here he has turned it up an extra notch.  At this point we know what we are getting in Robert Downey Jr., who has more than any actor come to define the roll in which he was cast. It’s laughable to think 5 years ago people questioned his casting in the original Iron Man. He is Tony Stark and in The Avengers he brings the same mix of narcissism, charm and heroism that has become as iconic as the armor he dons in battle.

It’s almost opposite for Chris Hemsworth and Chris Evans who have managed to disappear into their roles completely. Evans is Steve Rogers to me and when he finally gets his chance to lead the team, it’s goose-bump inducing. Mark Ruffalo is fantastic as Bruce Banner and it is the first time that the movies have captured the genius of the man behind the monster. Even Jeremy Renner and Scarlett Johansson, as the two “regular” team members, aren’t short changed. In fact, because you know the company they keep, sometimes their exploits are more impressive because they are making them happen with pure skill. Johannson in particular is given a lot of rich character moments and she delivers on them all. Oh, and did I mention the Hulk? Because make no mistake about it, once he appears he owns this movie.

It’s been 37 years since Steven Speilberg created what we now consider the “summer blockbuster” with Jaws. It’s been nearly that long since George Lucas shaped an entire generation of storytellers with Star Wars and it’s been about 30 since the two of them brought us Raiders of the Lost Ark. The Avengers belongs in the conversation with those movies, not because it is a perfect film, but because it embraces the same things those movies did. A love of the past, a masterful grasp on the present and an eye to the future that equals one thing, unequivacable cinematic joy.

I’m sure there will be the inevitable backlash, people will nitpick and dissect until they find every wart the film has, but let the haters hate. Because it’s all too rare you get a movie like this, something I will show my kids one day that will effect them the way the movies of Lucas and Speilberg did for me.  I love this movie with just about every fiber of my being and it is a must see in every respect. The action will blow you away, the acting is superb and it is one of the funniest movies you will see all year. Oh, yeah and HULK SMASH!