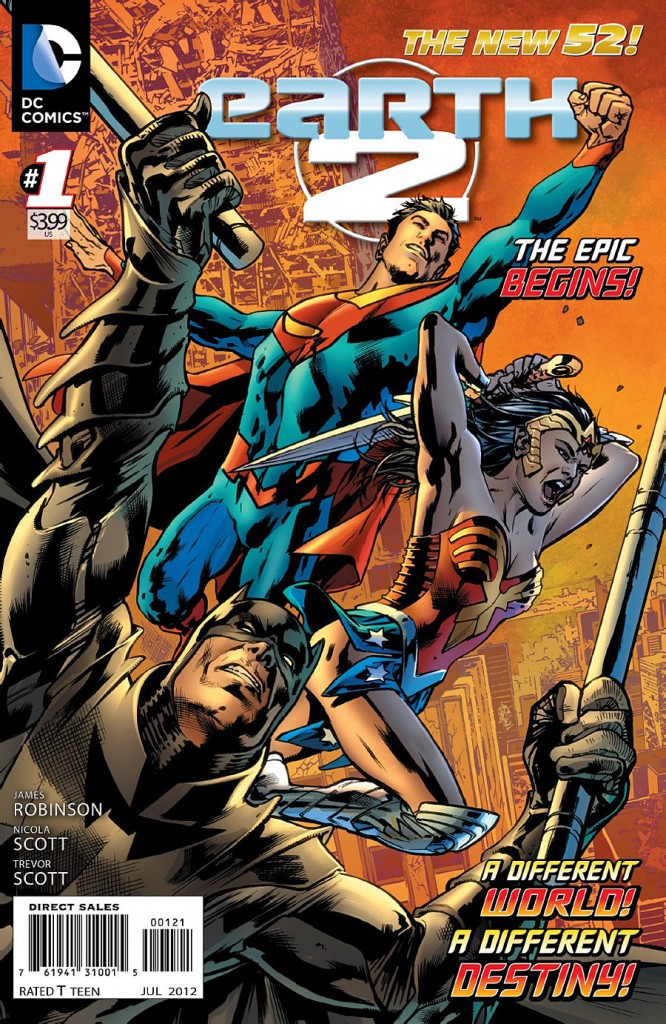 Comparative reviewing is often a dangerous road to travel down. For the most part I avoid it because I think it’s a lazy way to get your point across. Works of art should be judged on their own merits and not on how you feel about in relation to something else. That being said when a book like Earth-2 comes out that is literally a parallel to an entire universe of comics, I think it’s acceptable to contrast it with its counterpart. It’s most direct brother would have to be Justice League as both deal with the world’s biggest heroes taking on Darkseid’s army. But where Justice League, with its empty action and inconsistent characterizations, never really clicked for me, James Robinson’s Earth-2 delivers, not just an epic scope, but an emphasis on character that has me wishing this was DC’s flagship title.

The very idea of Earth-2 is an intriguing, if slightly confusing concept. Take a world much like our own, populated by characters very close to those we see in main continuity and tell stories with them. There is a Superman, a Batman , a Wonder Woman, but there is also a grown up female Robin.  The point being, things are similar and yet quite different. The existence of this slightly tweaked reality gives everything a fresh feel because none of the characters feel safe. Of course Scott Snyder’s not going to kill Batman off on Earth-1, but who says he needs to exist on Earth-2? This gives James Robinson’s story a set of stakes not seen in the other line of books and it’s better for it.
Robinson is also not afraid to paint his panels with captions that give you constant access to our heroes inner monologue. These peeks into the mind of a character raises Superman above being just a boring do gooder and takes Wonder Woman past that of two dimensional warrior.  Robinson also mines deep emotional connections between his Batman and Robin that are pulled off perfectly.
Emotions aside, this is primarily a battle book and it’s in those high octane moments that Earth-2  really soars. The only place the book  falters is in its post war scenes. There are two character introductions in these pages that feel like they belong in a back up story rather than the main plot of this book. That being said I was energized by the writing here and I’m greatly anticipating the next issue.
WHAT YOU NEED TO KNOW
Very little, but it is key to understand that the events of this book take place in a reality parallel to our own.
VERDICT
Buy It – Earth-2 is thrilling, energetic, emotional and epic. In other words  it’s everything I wanted Justice League to be. James Robinson pens a tight script that presents a battle with real stakes and Nicola Scott delivers stunning art. Pick this one up.