Sometimes one review isn’t enough, sometimes editors need to have their voices heard and sometimes there is nothing left to do but drop the gloves and fight it out. In a new column we are calling, Dueling Reviews! Two editors enter, one leaves, let us know on twitter @talkingcomics who wins and who loses. First up on Dueling Reviews is… 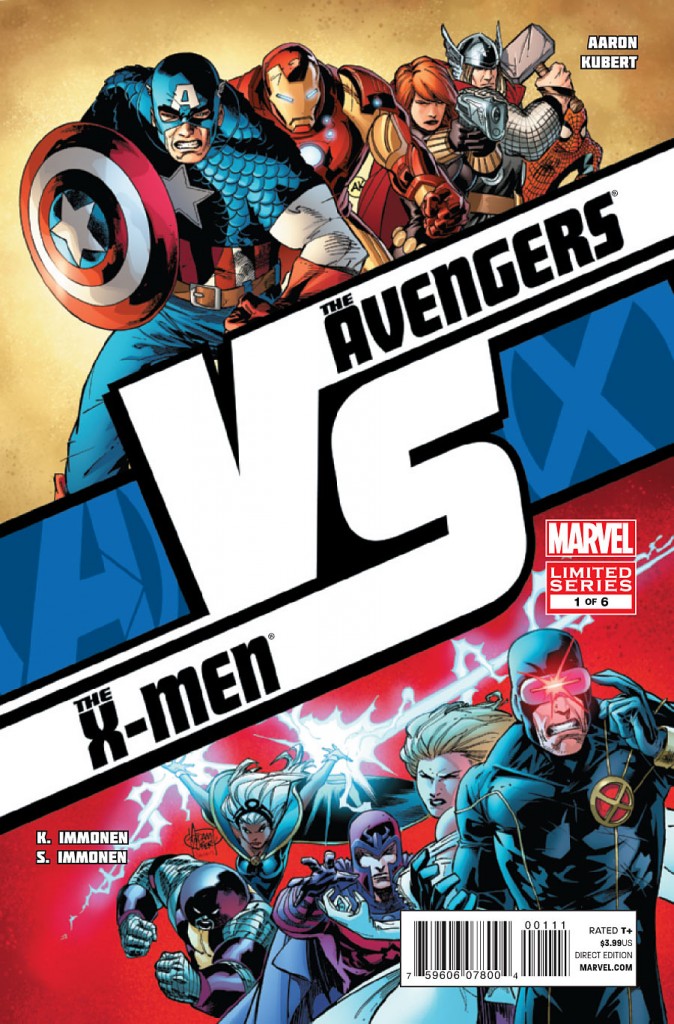 “The Thing vs. Namor, the Sub-Mariner”

Today’s review will be brought to you by the letter “Feh”.

I don’t mean to infer that “AvX: VS. #1” is a bad comic book, far from it. As a matter of fact, there are quite a few fun little moments scattered throughout the two stories that make up the issue, it’s just the over-whelming sense of…well, nothing really. As it’s a side-bar series, designed to complement or enhance the main “AvX”, and as so ably pointed out in the book’s intro, there will be fights, just don’t come looking for plots. The action sequences are well-done (kudos to Messers Kubert & Immonen on the art!), but they lead us nowhere, as the status quo must be maintained in order to get us to the next issue of “AvX”, and there-in lies the problem. For a cover price of $3.99, I need a little meat with my potatoes, so if I purchase a “Conflict” issue, and there are no clear winners or losers, it smacks of compromise and I’m left unfulfilled; and although there’s a nice bit of dramatic fore-shadowing by Mr. Aaron via a Magneto thought balloon late in his story, we’re left as we began. Again, that is the stated intention of this series, to expand on the individual match-ups that make up the grander battle, so… why am I complaining?

Well, first off, as some of you already know, I live to kvetch about stuff—it’s my life’s blood. More importantly though, I believe there was a missed opportunity here to get more deeply into the psyches of these classic characters, without sacrificing the action, which would have heightened the larger socio-political issues of the main series. Looking back to one of Marvel’s first cross-overs, “The Avengers/Defenders War” from back in the 70’s, each hero had his or her moment that defined them personally, as well as their place in the larger context, and that context is what’s absent here.

All that said, both stories were fun, disposable reads, and both Ms. Immonen and Mr. Aaron  captured the attitudes of their combatants within the limited framework of these short pieces, and as mentioned previously, the art by Adam Kubert (#1) and Stuart Immonen (#2) was well-paced. This could have been a disaster under lesser hands, so my thanks to all involved for a reasonably painless way to spend a few moments with four icons.

VERDICT:  If you’re a fan of super-hero fisticuffs, this is definitely up your alley. If not; if you’re at all torn about passing this up, due to the “tie-in” nature of the book, don’t feel too badly—the larger story isn’t really addressed here, and I’m (fairly) certain that any over-riding plot points will be covered elsewhere—sit this one out.

How do you judge a work of creativity? Do you compare it to other stories of its kind? Do you try to juxtapose what the story does in contrast to what it has the potential to achieve? Or do you critique solely on the merits of how successfully it achieves what it sets out to do? If it’s the last, then there is no question that AVX Vs #1 is a rousing, if flawed, success.

The premise of AVX Vs. is simple, instead of focusing on the Avengers Vs. X-Men war as a whole, it focuses each issue on two separate one on one encounters. Take for example issue one, which sees its pages being split between Iron Man vs. Magneto and The Thing vs. Namor. The book promises to be “The fightingest book you’ve ever read” and it delivers on that promise. So, if you are looking for rich character development and if pure action puts you off, this is not your book. But, if you want to see a comic that features Iron Man calling on the power of the heavens to take on Magneto then you’ve come to the right place.

AvX Vs. #1’s writing duties are split between Jason Aaron – who handles the aforementioned Iron Man v. Magneto skirmish – and Kathryn Immonen – who must find new ground to cover in a Namor v. Thing matchup that’s been going on about 50 years. In this smack down of Marvel writers Mr. Aaron comes out on top. He devises, not only a sharply clever battle between a man of metal and the mutant master of magnetism, but one that draws on the overall threat of Avengers Vs. X-Men.  Kathryn Immonen comes in a little worse for wear after her undertaking, but thats not to say she comes off badly. Truthfully her Namor vs. Thing fight is a lot of fun, but it doesn’t pack the same punch – pun intended – as it’s sister story. It feels like the warmup to me and not the conclusion, and I think the book would have played much better if the stories had been swapped.

This being a book all about action, it’s important to highlight the artists and Adam Kubert and Stuart Immonen really knock this one out of the park. Kubert’s layouts mostly span two pages at a time, and it provides a sense of scope that is perfect for this type of story. The sense of speed, weight and violence on each page makes it feel like you are watching a live action film, rather than reading a book. Immonen is working more traditionally, but he is more than up to the task of showing off two titans clashing.

Buy It – AvX Vs. #1 doesn’t have a lot substance, but what it does have is dynamic and fun action. This book never lies about what it wants to be, and in fact tells you on the title page what it is and advises you not to buy it if you you don’t like it. If you are looking for something deep stay away, but if you want to see some really clever battles and beautiful art pick this up.

Who came out on top in this review battle? Let us know on twitter @talkingcomics!