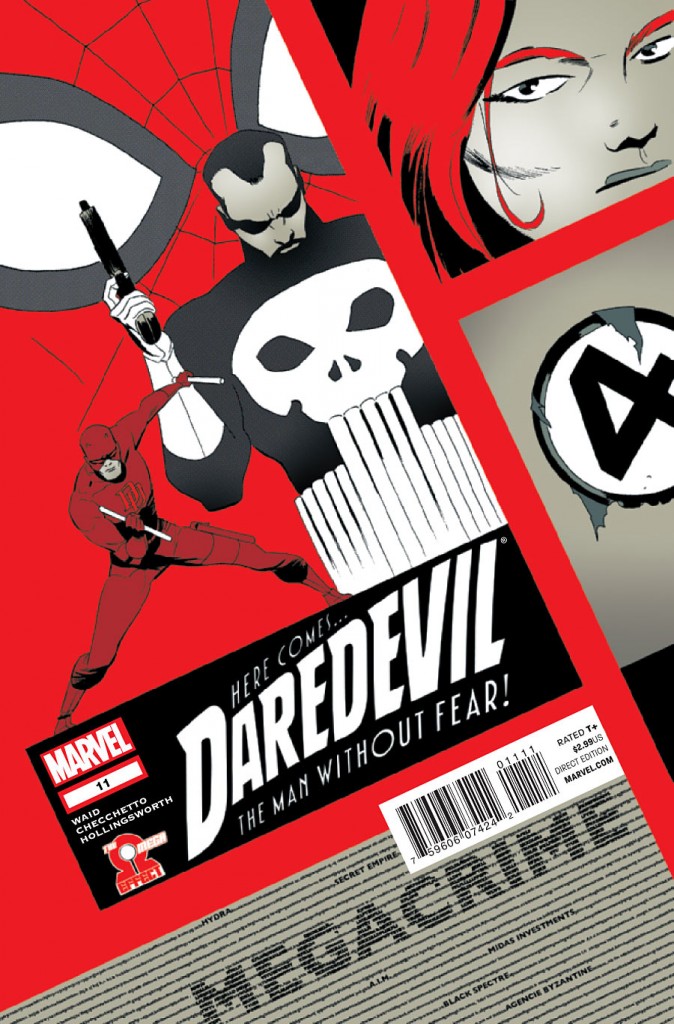 Some story lines expand on the over arching plot of a universe, some help to enrich and deepen the characters in said universe and some just seem to tread water, acting more as a diversion than any sort of crucial plot component. Unfortunately, the three part Omega Effect crossover seems to fall into the latter category. Don’t get me wrong Daredevil #11 is a well written comic book (certainly the best of the three) and it brings the story to a relatively satisfying conclusion, but that can’t save it from feeling like nothing more than a stop gap measure.

In the interest of full disclosure I will say that I’m not a very big Punisher fan. I think that treating a character who kills as a “hero” is morally grey to say the least. I prefer him as a side character, someone who illustrates the dark path that any of the heroes we know and love could go down.  Thankfully, in Daredevil #11 Mark Waid treats the character of Frank Castle and his ally Cole with a healthy amount of disrespect. Seen through the eyes of actual heroes, who never take the easy way out, The Punisher seems as irrational and insane as he should. There is a speech that The Man Without Fear gives in the latter half of the book, one that lays bare what he thinks of people who are in love with their own pain, that left me with the beginnings of goosebumps. This moment only served to heighten my anxiousness for The Omega Effect  to be over and for Daredevil to get back to being about Daredevil.

The real problem with The Omega Effect has not been the writing or the art, but the in the very conception of the idea. Look at Daredevil #10.1 and now Daredevil #11 and tell me what has changed? In my view nothing. The inclusion of The Punisher, Cole and even Spider-Man himself did nothing to further the story of Matt Murdoch’s quest to take down Megacrime. The lack of significant story progression could have been forgiven if we discovered new and exciting things about these characters, but alas we have not.

You won’t be sorry you read Daredevil #11 as it features Mark Waid’s wonderful prose and pacing, but you will find yourself unsatisfied with where this story goes. One bright spot is that I’m now familiar with artist Marco Checchetto. I started out cool to his grittier style, but found myself really appreciating what he brings to the table by the close of the issue. The end of the book does promise ramifications for Daredevil in the issues to come, but until that happens I’m calling this arc a wash.