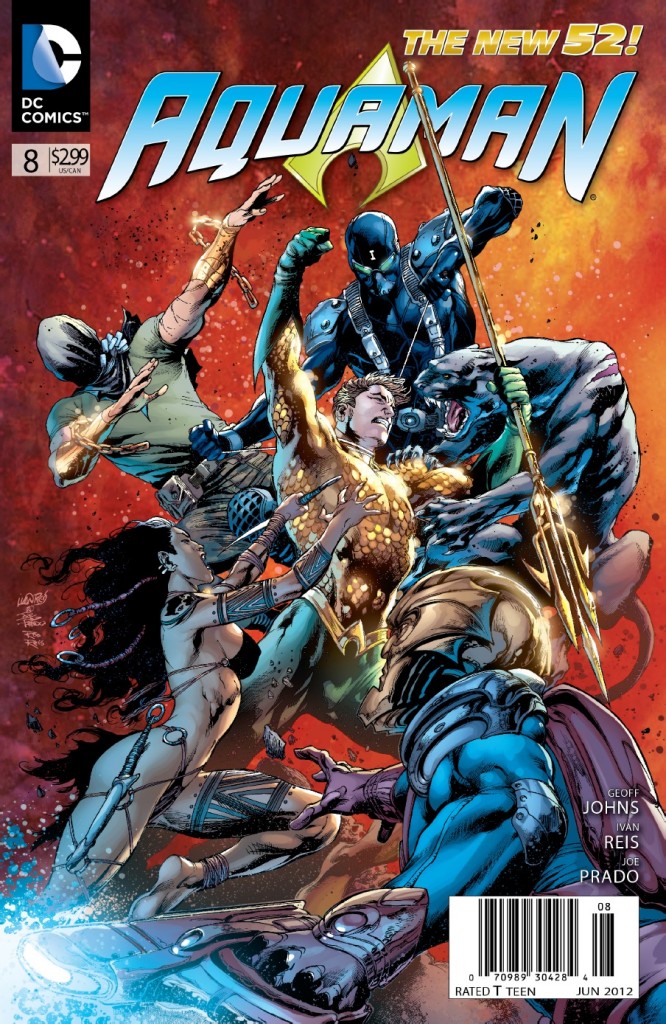 I haven’t been in this comic book game for very long, but even as I was growing up I don’t ever remember a time when it was cool to like Aquaman. However, things since the launch of the DC New 52 have drastically changed for Arthur, his hotter than Ariel super girlfriend Mera, and the rest of his aquatic pals. Geoff Johns has reinvented the character and launched him into the New 52 as a complete bad ass.  I’ve found the latest issues of Aquaman to be damn entertaining, and issue #8 is no exception.

The Black Manta is back and threatening the lives of everyone who crosses his sinister path. So, of course, it’s up to Aquaman, Mera (so hot), and several players from Arthur’s past to stand against The Black Manta and his plans to make the group pay for their past transgressions. We’ll dip into a little of Aquaman‘s past, as well as experience the man he used to be after becoming so reckless after his father’s untimely death.

I rather enjoyed this issue, because it allowed me to have a clue into the past that had played a very significant part in forging the hero I’m currently reading about. For someone who has never picked up an Aquaman comic before this particular run, it feels like almost a necessary step in the process of reintroducing your audience to this particular hero. I love me a good origin story. And while this issue may not be an all out look into Arthur’s past, it certainly does the balancing act well as it jumps from the “then and the “now”.

I’m also enjoying the process of being reintroduced to new characters outside of Arthur and Mera. We’ve got characters such as the likes of Ya’Wara, Shin, Kahina and several others that round out the cast quite nicely. It should be interesting to see how Aquaman and his current fiery red squeeze, Mera, handle this lot coming into the fray after such a lengthy absence.

If you’ve never read an Aquaman comic before I assure you that this is the time to start reading about his adventures. People won’t make fun of you, I swear. You might have to do a little explaining, but I’m sure that as soon as you give them the first few issues they’ll be … wait for it … hooked! (That is the best damn pun you’re going to hear all day, admit it!)