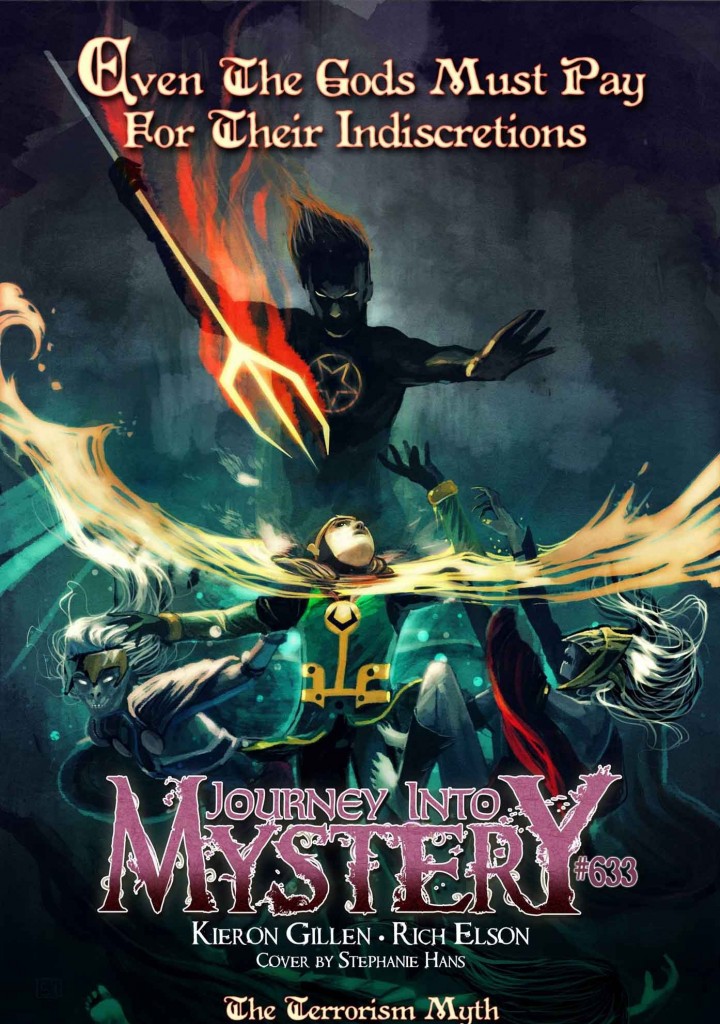 I’d never picked up a book solely dedicated to any of the Asgardian brethren until I stumbled upon Journey into Mystery #633 a few months ago. It was still in the infancy of Talking Comics, so I was hoping to jump onto a few new series and JIM happened to tout the subtitle “The Terrorism Myth Part One” on its front cover. I figured, “Hey, it says part one. How complicated could it be?” That nonchalant decision to pick up this arc has led me to discover one of the most interesting titles I’ve read since my return to comics.  Journey Into Mystery is never what it seems and is in the best sense, a contradiction in terms in almost every-way.

The apocalyptic events of Fear Itself  left Asgardia and Broxton, Oklahoma in ruin. In addition there are thousands of people caught inside fever dreams which the Fear Lord Nightmare is harvesting in his attempt to gain a new level of power. So, it’s up to a reincarnated child Loki, his friend and guardian Leah and son of the Devil Damien Hellstorm to stop him.  All you really need to know is that the God of Mischief is trying to make up for all the pain he has caused and is stuck without his usual repertoire of magic.

This is a comic book that is uncompromisingly dense in it’s mythology and yet somehow manages to be accessible in it’s own obtuse way. It’s also a story that embraces the over the top Shakespearian nature of its God like characters, while at  the same time using clever satire to show just how ridiculous this world of Devil born exorcists, Fear Lords and reborn demigods is.

The truly surprising thing is that none of these contradictions ever devalues its counterpart. It’s a high-wire tightrope act that, despite constantly switching tone between hysterics and histrionics, feels like a consistent and organic story from start to finish. Whether it’s cadaver Thor recounting the events of the past issues(that’s not a spoiler don’t worry) or the ridiculous appearance of the Fear Lord of The Lurking Unknown, there are four issues worth of evidence that leads me to believe there is something delightfully insane about the book’s writer Kieron Gillen.

That insanity breeds an atmosphere of surprise and fun in Journey Into Mystery: The Terrorism Myth  that isn’t present in many of the A-list super hero books. The decision to revert Loki to this childlike state could have lead to disaster, but instead it allows Gillen to write the God of Mischief as a person struggling against his very nature. If you had the chance to start over from the beginning knowing what you know now, could you turn out any differently? That’s what Journey Into Mystery asks us to contemplate and it’s a gold mind from a story perspective. The fact that it does all this while still being so delightfully different is all the more reason to pick it up.

Beware though the book is extremely wordy. The sumptiously drawn pages are often almost completely covered in captions and word balloons. If a lo of text turns you off you may want to stay away.