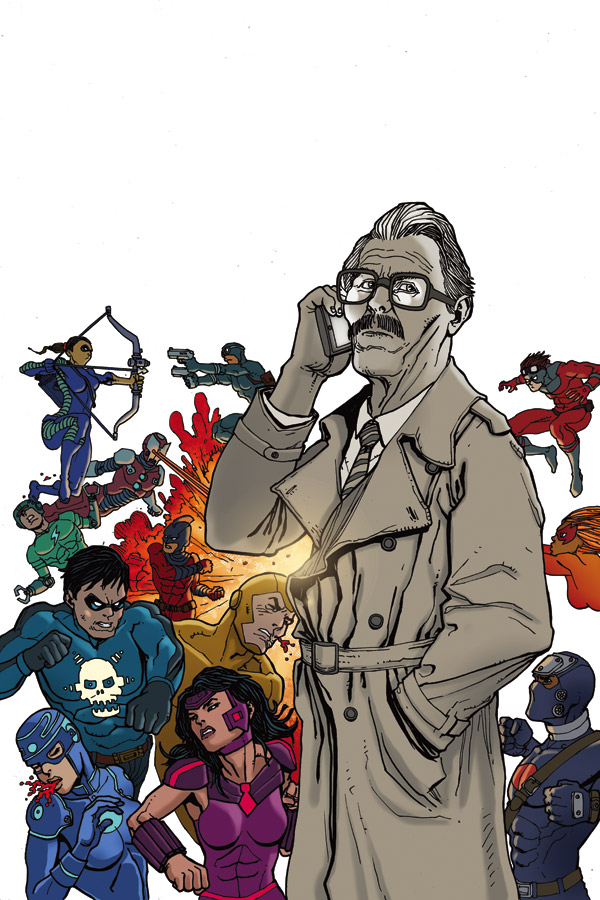 In my review of Hell Yeah #1 I wrote about my reservations in regards to the main character, the potential of the ideas the story purposed and my hope that writer Joe Keatinge would eventually cash in on the events he had set in motion. Well, we didn’t have to wait very long, as issue 2 expanded the reach of the story of Benjamin Day into multiple universes and now Hell Yeah #3 has jumped the story even further ahead, as it begins to outline a multidimensional conspiracy. Keatinge uses this to create something that goes beyond the normal superhero story and does what so many stories strive to do; set itself apart from the pack. The book isn’t without it’s storytelling flaws, but the promise of would it could be is tantalizing.

Hell Yeah #3 institutes all manner of my favorite science fiction story devices. The best of which is the introduction of a morally ambiguous person of power who knows more than any one person should. Think Charles Widmore from Lost crossed with the Smoking Man from the X-Files. I find these characters so intriguing because they hint at a larger world behind the scenes. This particular figure shows us that whatever is happening at the moment with Benjamin Day is not a random development and that there is a lot of back story to get through before we have all the information.

The best thing though, is that it’s not clear whether Keatinge will even decide to divulge that information to us. In narratives of this nature it’s often the secrets you do keep that are more important than the ones you give away. So, far Hell Yeah has done a good job of hiding as many cards as it shows. It’s also vital to have a mission statement in these types of branching stories and Hell Yeah #3 ends with a statement that could define the rest of this arc.

The only real problem with Hell Yeah is the way in which it chooses to convey its complicated plot threads. There is no visual cue that the story is communicating a flashback or an alternate universe happening. These scenes are often intercut with what is happening in reality one and so the reader is asked to rely on the appearance of certain characters as sign posts to know which time and reality they are in. If this sounds confusing on paper, than you have an idea of the mental gymnastics it takes to keep track of these timelines while reading the book. If these were characters that were well established it would be one thing, but because I am still getting them straight in my head it becomes a task to track who is who. I found myself having to read the issue a second time in order to understand everything.

It’s a good thing then that Hell Yeah is a book worth reading more than once. Because once the confusion passes and you begin to ease into the visual language at play it’s plain to see that what remains is a complicated, deep story full of big ideas and epic scope.

Buy it – Issue 3 thrusts the story into new territory, outlining the multi dimensional scope and laying out bare what is at stake. Like all great stories it poses a problem with no easy solution. I look forward to how this arc will play out, because despite some storytelling issues and a still questionable main character, Hell Yeah is an epic tale that also remains one hell of a good time. Should you pick it up? Hell Yeah!