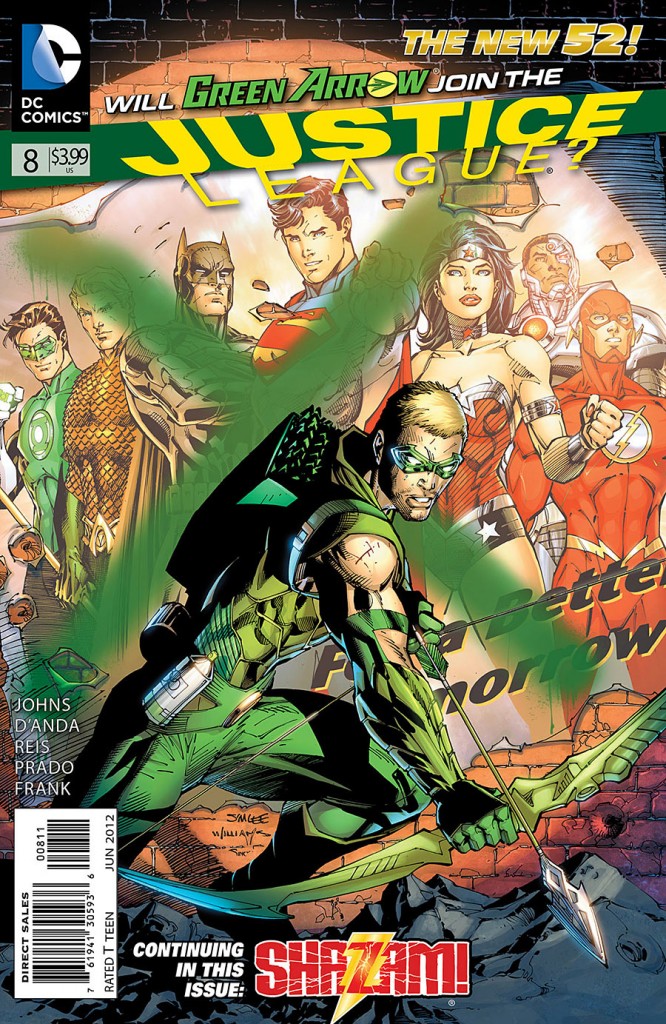 At this point I don’t know what there is to say about Geoff Johns’ Justice League other than, meh. This current run, despite one stellar issue, has consistently come up short, with issues ranging from just okay to downright bad. Justice League #8 rests squarely in the “just okay” category, with its highlight being the inclusion of Green Arrow, and it’s downfall being, well, anything else.

I haven’t been reading the solo Green Arrow book, but here Johns casts him as a kind of Justice League groupie. He spends the entire book trying desperately to convince the super team he is worthy of membership in their group. I found these scenes to be entertaining in a light and forgettable kind of way. The only problem with his attempts is that he never does anything particularly impressive or heroic, so you never feel he actually deserves membership in the League. Johns does write Oliver Queen with an entertaining mix of gusto and desperation. This makes him a more identifiable hero than any of the actual members of the Justice League. It’s a shame that he seems to be a temporary addition to the series, but it seems to be a trademark of Justice League to abandon the things that it does best.

The one thing that the book always had going for it was Jim Lee’s stellar art, but here the visuals of the book are handled by Carlos D’Anda, Ivan Reis and Joe Prado. The result is an art style that remains high quality, but one that shifts wildly as the book progresses. It’s a distracting and unwelcome change that puts an accent on just how mediocre Justice League #8 is.

Like the issues that preceded it, Justice League #8 is a mish mash of very good elements -Green Arrow’s interaction with the team- and down right boring ones – the Shazaam back up story. If I wasn’t writing comic book reviews I wouldn’t be reading this book anymore. Skip it.