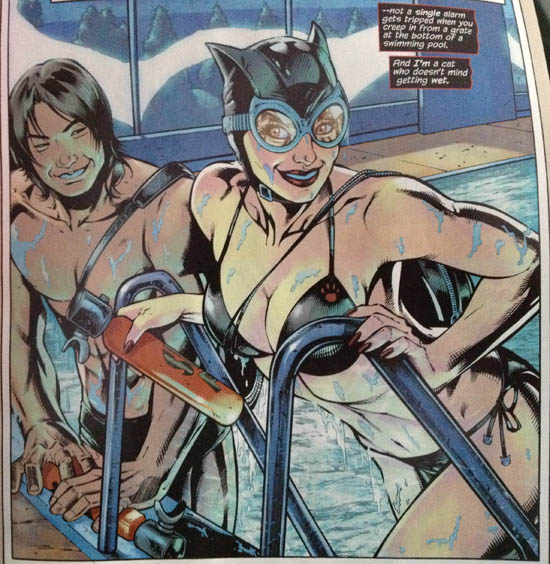 Where to even begin? I suppose I should first start this article with a confession. Since the beginning of the DC New 52 I was the only voice of Talking Comics that felt as if there was something to appreciate about Judd Winick‘s Catwoman run. Gratuitous poses, skimpy outfits and Bat-sex aside, I still hold to the fact that I was entertained by the more emotional and psychological aspects of the story being presented in the first several issues. Selina started off her run of the New 52 as a broken woman. After her own selfish actions had caused her to lose a near and dear friend we got to witness Selina catapulting herself into a rather harsh and exploratory introspective nightmare that gave her comic an emotional edge above others. Unfortunately, things seem to have taken a turn for the worse as the first arc had ended and the issues continued to slink their way onto the shelves.

Now, understand, I am a huge Catwoman fan. And I’m sure that it’s because of this fact that a part of me just did not want to admit that one of my favorite women of the DC universe was steadily turning into a true “lady of the night”. My argument was that Catwoman has always been sexy. But there is a clear distinction between being alluring and using your sexuality to get what you want versus just flashing your tits and leather clad ass to best your enemies. Yes, Catwoman is still the acrobatic minx we’ve known her to be all of these years, but gone is her sense of class, her ability to win men over with her smile and ways of getting what she wants while still wearing clothes that cover a good portion of her body.

Catwoman since the New 52 has become a symbol of why so many women characters in comics cannot be taken seriously by the men who purchase them. I’m a man of many tastes, and I would be lying if I told you that I like my women pure and bookish (well, the librarian look melts me but still …), though I think things have gotten out of hand. The display of skin, suggestive angles and poses of her character (in my opinion) are not something that belongs in the pages of a comic that can be found on the shelves of your local Toys R Us. Even though the book is clearly marked “Teen+” on the front cover, it simply does not begin to cover the spectrum of the book’s contents. Sex, violence, thievery, blood, mutilation, skin, cleavage, ass and even pole dancing are all things that in any decent society would be considered “Adult” themes. So why is this book still being marketed to teens? Just because it’s Catwoman?

Now, as I’ve stated, I am no stranger to adult themes. I’m the proud owner of many comics and collected works that display either scantily clad women or full on nudity (Bruce Timm’s Naughty and Nice: The Book of Good Girl Art, anyone? Yeah, I thought so. Yowza!), not to mention an extensive and vastly illegal collection of um … well, moving on … However, the reality of what Catwoman is turning into has dawned for me, however slowly it might have approached my lustful brain. I think that perhaps if Judd Winick and Adraina Melo are going to continue being the front runners for this once respectable and sensational character within the DC universe that it might be time to go back to the drawing board. Case in point: me. You’re turning a loyal fan, who has loved Catwoman ever since I could feel a stirring in my adolescent nether regions as well as being stimulated by her mentally (I swear that that’s part of the attraction as well!) into someone who has grown disgusted by the path she’s being forced to walk. That path being that of a stage within a cigarette smoke choked strip joint, where our girl uses her body to get what she wants before kicking a man’s balls out the back of his asshole, biting his ear off, then laughing about it. C’mon, she deserves so much better than this!

Surely, such a cherished character would be treated with a whole hell of a lot more respect than she’s receiving in her very own title, no? Bring me the Catwoman who uses her cunning and wits to sneak around the city, snatching up jewels and protecting the innocent; not this caution to the wind Jezebel that spends half a page telling me how hot an Asian Static Shock (Spark) is. I understand that Catwoman is supposed to be a “bad girl” of Gotham, and that with the reinvention of the DC lineup we all have to adjust to some changes, but this seems like a step in the wrong direction for Selina Kyle. Someone seriously needs to crack the cat-o-nine-tails on this one and bring this sexy, stylish character back to true form.