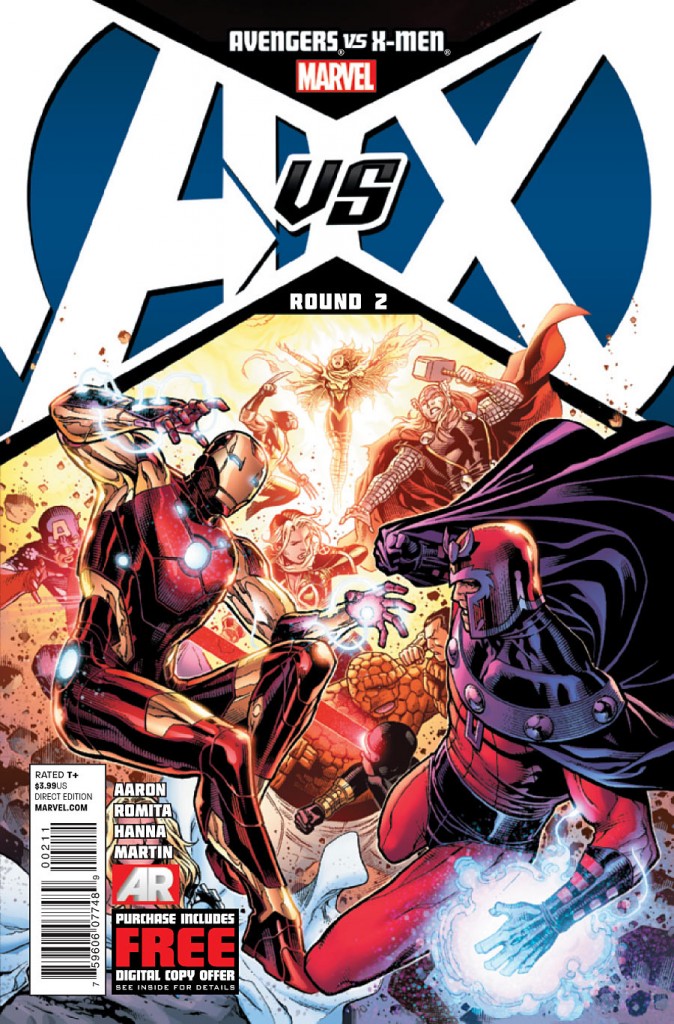 When Marvel announced Avengers vs. X-Men they also revealed that, unlike recent events, the story would be written by a host of Marvel’s top writers. Last time out we saw the story through the eyes of Brian Michael Bendis, and what resulted was an impressive, but decidedly conventional piece of pop storytelling. This time around the prose falls into the hands of Wolverine and the X-Men scribe Jason Aaron.  He writes AVX #2 with the weight and reverence of a Greek myth and this “old style” gives the story a shot in the arm. It also sets up Avengers vs. X-Men as an event that has the potential to surprise week in and week out.

There are big things happening in this story and Aaron makes us feel the weight of the action by imbuing his captions with delightfully over the top language. One of my favorite passages is the one Aaron uses to describe Wolverine. “The fiercest X-Man who has ever lived versus an island of people he once called family. Yet another dark day for a man who has known far too many.” Round 2 is full of those kind of flourishes and it makes the book a treat to read cover to cover. Jason Aaron is a writer I only have limited exposure to, but after this issue is now at the top of my “catch up” list.

My only gripe with the story is that it seems to begin differently than issue one ends, with the Avengers being forced out of the Helicarrier instead of leaping from it. I don’t really mind because I actually like the way things go down in this issue over the last one. It does seem odd we’d have a big continuity error this early in the event, but that’s a minor quibble in an other wise awesome book.

VERDICT
Avengers vs X-Men #2 is a leap forward from the last issue in terms of style and level of action. Writer Jason Aaron fills his story with beautifully worded captions that give weight and gravity to the battle they are describing. Those who complained that last issue felt like more of a tease will be very happy with the battles that begin to unfold and at the book’s surprising and satisfying ending. I really liked AVX#1, but I loved this issue. Buy it.