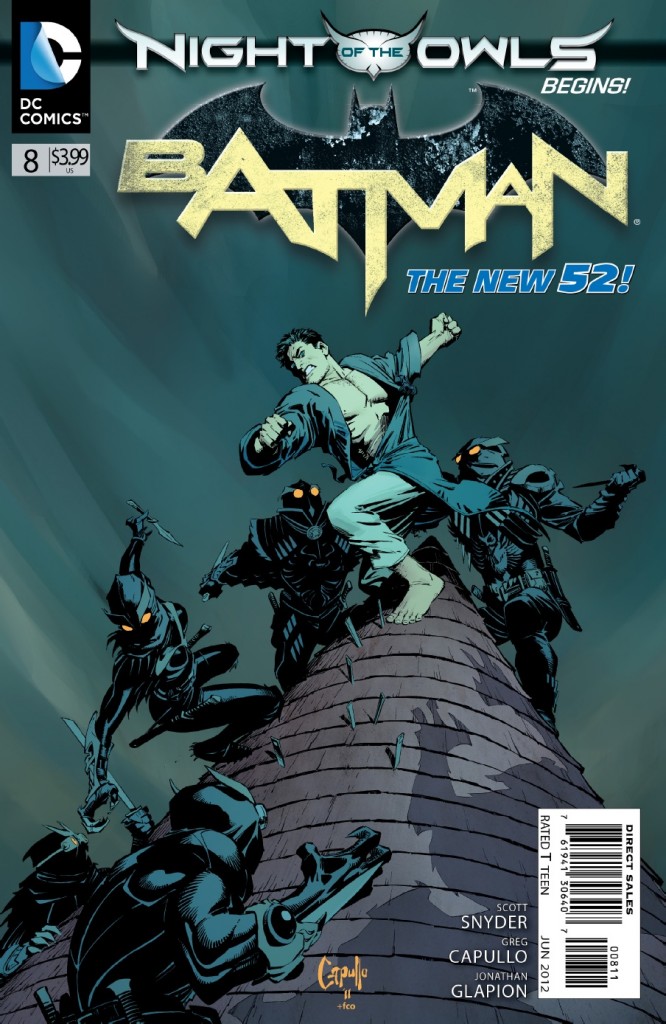 There seems to be event fever right now in the comic book world. Marvel has its universe spanning AVX, a Daredevil/Punisher mini event and the epic Ends of The Earth happening in Dan Slott’s The Amazing Spider-Man. All of which are story lines that I hotly anticipate each month, but none of them can hold a candle to the excitement I feel for the Batman centric event, Night of the Owls. The reach of this multi-part story will extend into many of the Gotham based comics being written right now, but the heart of it rests squarely in Scott Snyder’s Batman. This run has been stellar from the start, emphasizing character development over action, and issue 8 is no different. Snyder kicks off his massive arc with the usual cerebral mastery, but accents it with some impressive action and a backup story that literally gave me goosebumps.

Batman #8 begins with the same tone as the last few Bat books. Bruce Wayne is broken, beaten and is for the first time, adrift in a sea of doubt about his place in Gotham. It’s odd and almost uncomfortable to see Batman experiencing self doubt, but it feels like the only recourse considering the beating he has taken over the past few issues. This lapse in Bruce’s confidence also makes it all the more satisfying when he breaks out of it later in the issue.

The trigger for that resurgence of bravado is an attack on Wayne Manor itself. I know that the estate has been attacked countless times, but every time it happens I am struck with how anxious it makes me. Scott Snyder is playing with one of the it basest of notions here, that the home is supposed to be a place of sanctuary and safety, and once that is threatened it throws our whole world out of balance. Forget destruction of the planet, give me invasion of the home if you really want to pack a punch.

Greg Capullo continues to bring it every week with his impeccable pencils. His art is always audacious always pushing the limit, but never feels out of place or flashy for flashy’s sake. On a side note I have found that his Bruce Wayne is now the one I see in my head whenever I picture that character.

The back up story is written by Scott Snyder and James Tynion IV with art by Snyder’s American Vampire cohort Raphael Albuquerque. This meaty side tale, entitled “The Call” , is effectively a way to ensnare the rest of the “Bat family” into the Night of the Owls event. This could have been achieved with one or two lines of throw away dialogue, but instead Snyder crafts a symphony of interconnecting events that feels akin to the brilliant baptism scene in The Godfather.

The story also succeeds in being a showpiece for the stunning work of Raphael Albuquerque. Whether you are a regular American Vampire reader or an Albuquerque noob you can’t help but be mesmerized at his evocative use of heavy lines and ink splatted backgrounds. I’m so happy that we get more of these backups over the next few weeks.

Verdict
In case you couldn’t tell, I absolutely adore Batman #8. The main story and the back up are filled with sharp storytelling and fantastic art. This book is the whole package and if you aren’t reading it, then sort yourself out!