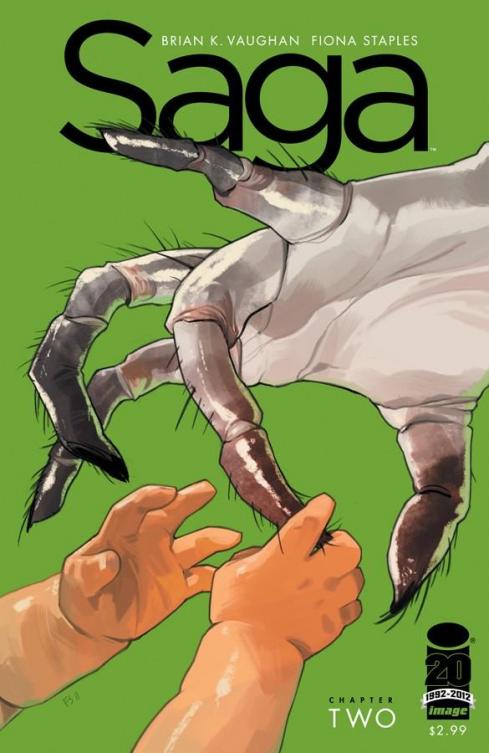 A saying that pretty well everyone has heard is “Don’t judge a book by its cover”, but let’s face it… we’ve all done it at least once before when visiting a bookstore (for those of who still visit bookstores). Without even opening the pages of the comic, I was already given chills by the haunting cover that Fiona Staples has come up with for Issue #2 Saga.

But getting into the comic itself, the first issue of Saga was a lot of to absorb in one issue. This second issue however, takes a step back and allows us to focus in on a few more specific aspects of the story. First off, we get a smidge more background on one of the bounty hunters out to kill Alana, Marco and Hazel. We also get a brief look at another side of the Prince thats heading up the search for our fugitives. And lastly, we get more of our protagonists, who really can’t seem to catch a break.

Thus far, Fiona Staples’ art has been consistent beautiful in these first two issues. She does an excellent job of bringing Vaughan’s words to life and I would even venture to say that she is 1-upping him as the most talented person attached to this series. The writing remains excellent, but the art is breathtaking.

Saga #2 was definitely a lot easier to swallow than #1. This issue, as mentioned, really cuts back on what you have to absorb but is still not quite at the pace I personally think it should be. There are still too many stories going on in each issue and Vaughan needs to start choosing which of those stories to focus on for each issue. The problem isn’t that it’s not interesting, its that it needs to give readers more to be drawn to each month instead of building up the story very slowly by including only so much every time a new issue comes out. I would love to see an issue that focuses solely on the bounty hunter or solely on the Prince and while that would probably still be a smidge irksome when we really want Alana and Marco’s story, I think it would leave more to be enjoyed with them in a future issue.

VERDICT
Saga, regardless of its flaws, is still definitely worth checking out. It’s still early for me to say whether or not things are coming together nicely but there are few Brian K. Vaughan stories that I haven’t enjoyed immensely and I would be a fool to give up on Saga without letting it come to its full potential.