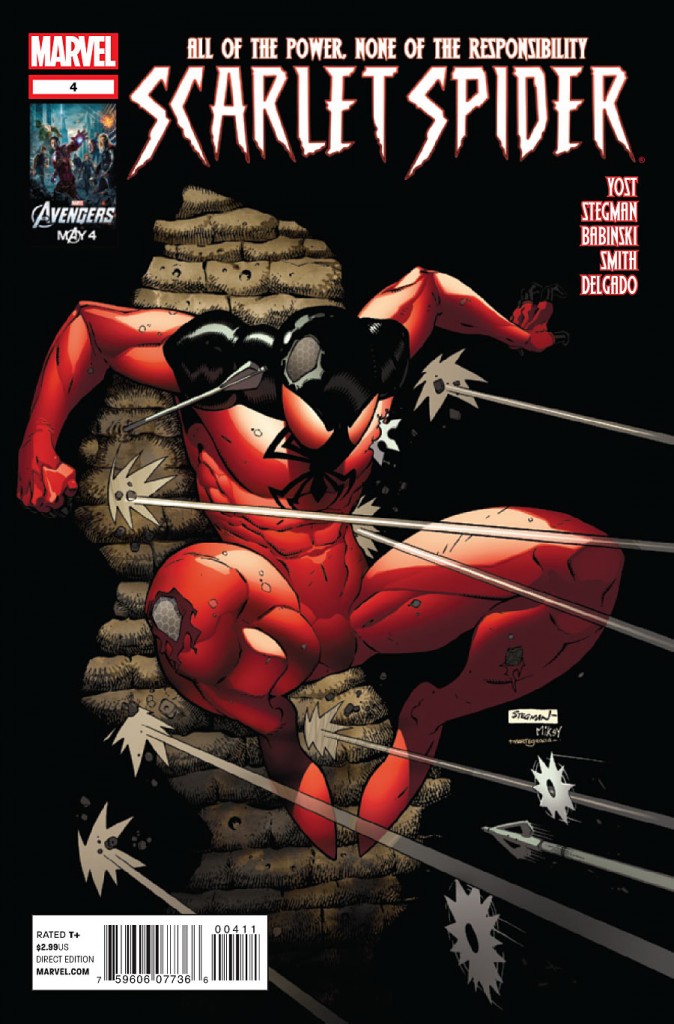 From issue one Scarlet Spider has set itself apart from its clone saga baggage by making Kaine Parker one of the most conflicted heroes in the Marvel Universe. I’ve been thoroughly engaged in his tale of redemption, but have been concerned about how long Christopher Yost could keep up the reluctant hero angle. My concerns were unfounded, however, as issue #4 adds a new wrinkle to Kaine’s plight. It also showcases a kick ass action scene, which all amounts to a satisfying and exciting fourth issue.

The aforementioned action scene sees the League of Assassins vs our hero, and provides a bevy of different foes for Scarlet Spider to take on. The Yost/ Stegman team does not squander this opportunity, as they create a ballet dance of quips and diverse fisticuffs, that give the battle a kinetic and delightfully over the top sense of style and flow. One of my favorite things about the scene is the lack of involvement from other heroes. It’s one of the best things about setting this tale in Houston and not New York.

The sequence isn’t without character and story significance though, as it ties in directly to Kaine’s ever evolving inner struggle. Scarlet Spider #4’s themes of redemption and the struggle to escape ones past, are amplified here by Kaine’s fear that he in fact can’t outrun what he’s done. Everything regarding him is great and I can’t wait to see what’s in store for our hero on the horizon.

The only weak point of the book is a scene involving the father of a patient that our doctor friend failed to save. The theory behind the encounter is sound, but the actual dialogue felt a little too on the nose for my taste. This is a slight bump in the road, and should not take away from this otherwise stellar comic.

VERDICT
Scarlet Spider #4 continues the tales of Kaine Parker and his doings in the city of Houston with a satisfying mix of fun and pathos. Ryan Stegman has an almost manga like energy to his art and Christopher Yost continues to provide solid writing at every turn. This is a must get.