FacebookTwitterPinterest
Have all of you out there been reading Mark Waid's amazing Daredevil run? Well why not?! Last week you were given the perfect time to jump on with Daredevil 10.1 and now off of the back of that, we have a three part crossover event called The Omega Effect. 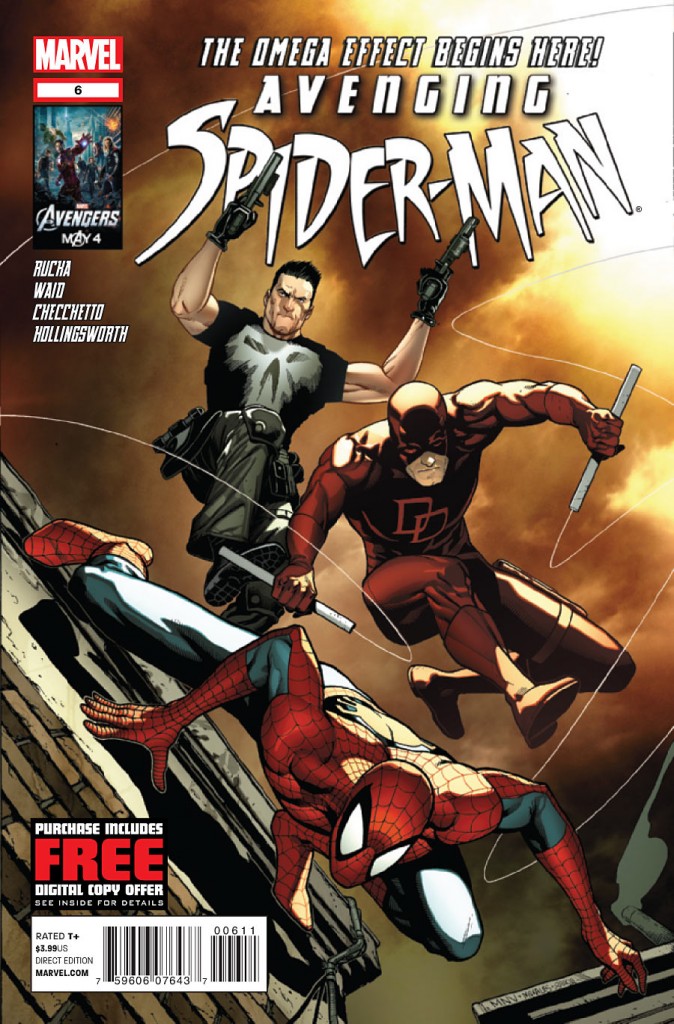 Have all of you out there been reading Mark Waid’s amazing Daredevil run? Well why not?! Last week you were given the perfect time to jump on with Daredevil 10.1 and now off of the back of that, we have a three part crossover event called The Omega Effect.  This mini-event brings together Daredevil, The Punisher and The Avenging Spider-Man and will span their three titles over the next few weeks. You see, Matt Murdoch has stolen this thing called the Omega Drive which contains all the information on the internal workings of a syndicate known as Super Crime. Needless to say now they, The Punisher and SHIELD all want to get their hands on it for different reasons.

Avenging Spider-Man #6 is the start of what looks to be the end game between Daredevil and the bad guys, with the extra wrinkle of a certain vigilante entering the fray. I’ve never read anything by Greg Rucka, but Mark Waid has been on a roll with Daredevil over the last few months, every story beat and syllable has been spot on and that’s why it’s disappointing that The Omega Effect Part 1 feels a little too busy and overstuffed.

I cannot say for certain that it’s Greg Rucka’s influence that makes this story less than stellar for me, but I will say that the inclusion of multiple cooks in the kitchen causes the story to feel more mish mash than in previous Daredevil, or Avenging Spider-Man issues. It’s difficult to articulate the factors that cause me to feel unhappy with the story, but if I could break it down into anything it would probably have to be that these characters don’t feel like they are inhabiting the same world. (A problem that wasn’t present in Daredevil’s crossover with The Amazing Spider-Man a few months ago, which was coincidentally written elusively by Waid.) What the Punisher wants, and how he wants to go about getting it never, jives with the ethos of Spider-Man or Daredevil and the reasons they eventually decide to work with Frank Castle seem forced and convenient.

I was also less than plussed with the art by Marco Checchetto which is technically proficient, but feels disconnected from the tone of the story.  These are pages to admire on a purely artistic level, not ones that engage us in any deep story way. I hate reviewing books like this, because in truth I didn’t dislike Avenging Spider-Man #6 at all, I just felt like it didn’t match up with work I’d seen in Daredevil up to this point. I was also hoping this would also get me excited  to at least try out the ongoing Punisher book, but it definitely failed in that respect. That being said, Waid and co. still have two more issues to pull me in and I have faith that by the end I will be fully satisfied.

Avenging Spider-Man #6 is a dispaointing addition to a nearly perfect story arc. It feels overstuffed, busy and never really nails the  tone of the previous Avenging or Daredevil books. It’s not a bad book, but it’s not a great one either. If you are looking to hop onto Daredevil for the first time, try going back one week and read issue 10.1 to get a better sense of what The Man Without Fear is really all about.  One less than stellar issue isn’t enough to pry me away from one of my favorite ongoing series, but I do hope the coming stories get me as excited as I was just a few weeks ago.