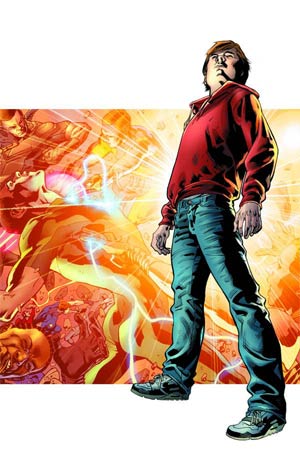 Having not received any powers after a magnificent and mysterious blast of super powered energy traveled throughout San Fracisco, Tommy is a complete zero. Eeking his way through his adolescence, Tommy works inside of the arena where the greatest entertainment event in the history of mankind is held each year: America’s Got Powers! With the memory of his fallen, older brother following him like ghost, Tommy soon becomes the center of attention after a set of new rules will change the way America’s Got Powers is played forever.

The first thing that comes to mind after reading the first issue of America’s Got Powers is: movement. The book has a seamless flow form one panel to the next that kept me engaged throughout my entire read. Whether a panel was filled with colorful and brutal action sequences, or merely served as a closer look at our title characters, everything in this book has been expertly laid out for the reader. The whole purpose of America’s Got Powers (the show) is for you to feel entertained, excited even. I felt that while reading this book and that is certainly not something that is always achieved in my reading sessions. I might be known around Talking Comics as the guy who gets excited by just about everything he reads, and that’s true, but this is legit.

There’s an overwhelming sense of grandeur that follows this book. I felt like I was actually watching this bold new program even though I was simply reading a comic book. The writers and artists of comic books do their best to provide you with enough information to entertain you, but it is up to us and our imaginations to fill in the blanks. America’s Got Powers is a thrill ride for anyone who likes to over-imagine their comic books. I heard the roar of the crowd, felt every sonic punch of the Paladin drones, and even felt a sense of pride in our main character by the time I reached the last page.

If I had to say just one negative thing about the book it would have to be the overuse of foul language at the start of the issue. Not that I am any stranger to everyone’s favorite four-letter-words, I mean really, just listen to our podcast. But in the case of America’s Got Powers, it just felt unnecessary and a might excessive. I understand that curse words are an all too present part of our English language, but without those words being on the page this book could have been opened to so many more readers. Ultimately, I won’t care so long as the content is good, and it is, but the uttering of so many curse words within the book feels just a little tacked on for shock value.

All of that said, America’s Got Powers  looks to be shaping up as a whole lot of fun and I totally recommend that you go out and get your copy today!