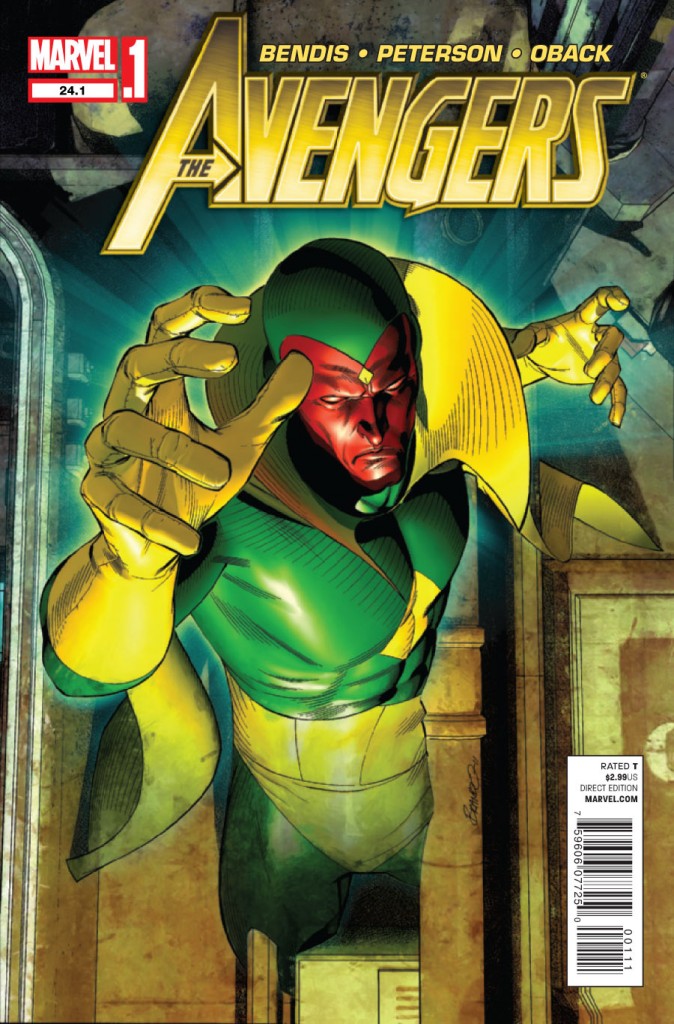 It’s no accident that Avengers 24.1 and AVX #0 hit stores shelves on the same week, in fact Brian Michael Bendis has shaped them as companion pieces to one another. On their own they are both solid and emotional stories, but it’s when you put them together that you understand the pain of the characters contained within. AVX #0 focused on Scarlet Witch, but Avengers 24.1 deals exclusively with how the android Vision is coping with his return to the land of the living. My compatriot Bob Reyer has said many times, in print and on our podcast, that he is tired of the morose writings of Brian Michael Bendis. If you share those same quibbles with BMB you may want to avoid this issue, because this is all about a character who is severely down in the dumps. However, and maybe you can chalk this up to my newness at Bendis’ take on the Avengers, I found the tale of Vision’s resurrection to be wholly effecting.

I will admit that Bendis is working in large Shakespearian swathes of emotion here. This is not a story of subtlety or simmering angers, but instead one of a character raging against the hole that has been left in his heart. Playing in that melodramatic a space can be dangerous, but thankfully, no matter how big the moments got, I always felt that there was truth at the core of the histrionics. The Avengers 24.1 also serves as a very effective introduction to the character of Vision as a whole. Bendis deftly weaves in huge chunks of his past, while also setting up what the android can, and for that matter can’t do. Constant readers might see it as retreading worn waters, but as part of Marvel’s .1 initiative I think it does it’s job very well.

The opening scene of The Avengers 24.1, a flash back to Vision’s death, is rendered in kinetic and bombastic beauty by  artist Brandon Peterson. I honestly stopped and just admired a panel of She-Hulk’s eye for over 30 seconds, just because I was so impressed by it. The entire book is big, showy comic book art and I, who usually doesn’t mention art in my reviews, would have been remiss not to praise it here.

Buy It – This may not change Bendis haters minds about his work on The Avengers, but I think it is undeniably a solid piece of emotional writing. The art by Brandon Peterson is phenomenal and those unfamiliar with the character of Vision will discover a complicated and interesting addition to their Marvel Universe.  I also think it’s a great primer to the events of Avengers Vs. X-Men.