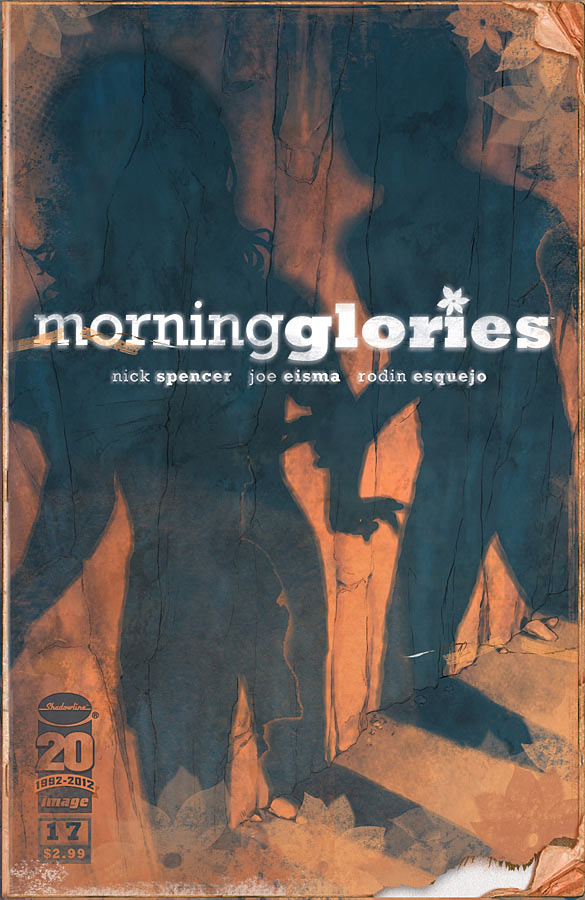 If you’re new to our site allow me to clue you in on a little something … we all love Nick Spencer and Joe Eisma‘s ever-impressive sci-fi psychological horror tale: Morning Glories. I’ve said it before and I’ll say it again … I have no doubt that when all is said and done Morning Glories will be one of the finest comic book series of recent years. Reading Morning Glories, as cliche as this is going to sound, is much like peeling an onion. With every issue of the comic released it’s as if you’re pulling away at another layer, only to find that you’ve got much more to go before reaching the core.

The latest issue of Morning Glories does something expertly that not too many comics are able to pull off. By this I mean that out of the 34 pages (consisting of no adds. oh, how I love that) only 15 of them deviate from a truly intense conversation had between the books resident jerk face, Ike, and the always fragile, Jade. After the events of the past several issues I found myself personally hanging on every word exchanged between these two characters throughout this issue. Tensions are at an all time high as the both of them hash out their differences and explore each others thoughts about their sinister prep school home. Several times while reading I found myself exclaiming thoughts out loud as a good buddy of mine looked on and rolled his eyes. He hasn’t started reading Morning Glories yet, so I’m going to give him a pass on his mis-informed scoff … this time.

If you happen to listen to our podcast (recorded and released every Wednesday) you’ll know that I am a huge fan of the work of The Luna Brothers. So far, the teaming of Spencer and Eisma has been the only comic book reading experience that has left me reeling at the close of each issue. Normally, I read, think, review, and move onto the next comic in the pile (imaginary deadlines and all). But then I read Morning Glories I find that I need to sit back for at least a few minutes and chew on everything that was just dumped on my dancing brain. I go make myself a drink (Pimm’s Liqueur with a splash of Ginger Ale), throw up the footrest on my recliner, allow my cat to snuggle on my lap (awww!), and just allow myself to stew in the events that had just taken place. It’s a good place to be. You should try it sometime.

Morning Glories #17, like all of the other issues that have come before it, is top quality comic book making at it’s finest hour. If you’re not reading Morning Glories by now then I strongly suggest that you do your best to seek it out and find out for yourself why it’s so damn good.