FacebookTwitterPinterest
When the movie version of “The Rocketeer” premiered to a mostly dis-interested audience on June 21, 1991, it featured a character unknown to virtually everyone except those of us lucky enough to have been thrilled by the stunning artwork of Dave Stevens on his signature creation over the preceding decade.

“The year is 1938, and Los Angeles is about to meet…The Rocketeer!”

When the movie version of “The Rocketeer” premiered to a mostly dis-interested audience on June 21, 1991, it featured a character unknown to virtually everyone except those of us lucky enough to have been thrilled by the stunning artwork of Dave Stevens on his signature creation over the preceding decade.

His art on the comic book version was modern, yet evocative of the story’s 1930’s setting, and was one of the high points in the medium’s history. Sadly, the exacting detail and scrupulous research that fueled Mr. Stevens’ work would lead to a dearth of published full-length stories from this talented creator before his untimely death from leukemia in 2008. In the zinc-plated, vacuum-tubed  pre-internet age, a news item would drift out regarding new “Rocketeer” stories; or as often happened out-of-the-blue, a Stevens cover would appear on some random comic—but without the advantage of fore-knowledge, they would often get past you, and a fellow fan would bring it to your attention in the back-issue bins.

It is to our good fortune that soon after his passing, Underwood Books, and their editors Arnie & Cathy Fenner (in conjunction with the Stevens estate) completed the career retrospective “Brush With Passion: The Art & Life of Dave Stevens”, that Mr. Stevens had begun, over his own protests in 2005. 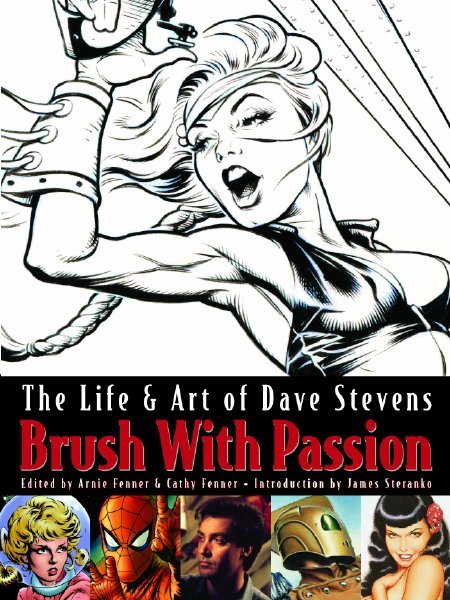 Part auto-biography, part art portfolio, and all indispensable to fans of great comic art, it pulls back the curtain on Mr. Stevens’ creative process and the myriad influences on his work, all while telling charmingly self-deprecating anecdotes about his life and career. Gazing at page after page of sketches, paintings, cover reproductions and the like, it’s easy to see how he synthesized all his experiences into something that was singularly his own. The world that Dave Stevens portrayed in his art is our own, writ large and small at once; the lighting and shadows, every fold of fabric, each crease in a leather jacket carries real weight; faces display genuine joy and anger, all within a framework of fantasy adventure. Glimpses of the work of such titans as Russ Manning (for whom Mr. Stevens did his first work), Reed Crandall, Lou Fine and Wally Wood peek through, but Dave Stevens art is one-of-a-kind.

Amazingly, Mr. Stevens was dis-satisfied with the majority of his own work, finding it “insignificant” and “a frittering away of what little talent I had”. He would continue taking classes to improve his techniques until sickness made it impossible. To this reporter’s eyes, and to many others’, his legacy, as captured within these pages, is as rich as any in the history of comics.

Unfortunately, “Brush…” is at present out-of-print, but reasonably-priced copies (under $100; it was $50 at publication) turn up now-and-again on ABE or Ebay, so keep your eyes peeled—if you’re at all an afficionado of great comic art, you’ll want this tome on your bookshelf.

“Brush With Passion: The Life & Art of Dave Stevens”

The Rocketeer’s girlfriend Betty was modeled after 1950’s  pin-up queen Bettie Page. After discovering her where-abouts in the 90’s (…and sending her a check!), Mr. Stevens became her friend, confidant and sometimes representative.